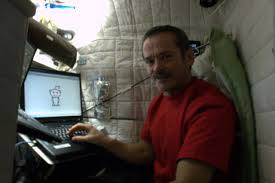 A Canadian astronaut has held a live web chat via Reddit from space.

Chris Hadfield, who is set to take command of the International Space Station next month hosted the web chat from his research vessel on the station, some 220 miles (354 km) above the earth, as part of Reddit’s ‘ask me anything’ (AMA) session on Sunday, 17 February 2013.

The session was run by Hadfield logging on to his laptop via a satellite relay to a server in Houston, Texas.

Hadfield, who will become the first Canadian to command the International Space Station, said to the thousands of people tuned in: “The purpose of all of this is to connect with you and allow you to experience a bit more directly what life is like living aboard an orbiting research vessel.”

Over 2,000 questions and comments were posted to the astronaut via the AMA session.

The comments ranged from ‘what does space smell like? to the experience of weightlessness.

There were also questions about the recent meteorite, which shot across the Russian sky last week.

Hadfield said that due to the station’s location on the other side of the earth, he did not see the meteorite. However he did add that he regularly saw small meteorites burn up between the space station and the Earth every day.

He said: “I watched a large meteorite burn up between me and Australia, and to think of that hypersonic dumb lump of rock randomly hurtling into us instead sent a shiver up my back.

“Sometimes occupants of the International Space Station hear pings as tiny rocks hit our spaceship, and also the creaks and snaps of expanding metal as we go in and out of sunlight. The solar panels are full of tiny holes from the micro-meteorites.”

When asked by a Redditor, how the earth looked from space, Hadfield responded by saying: “It looks like a carpet of countless tiny perfect unblinking lights in endless velvet, with the Milky Way as a glowing area of paler texture.

“The most beautiful to me are the Bahamas, the vast glowing reefs of every shade of blue that exists.”

Hadfield has already been to space twice before this current trip and next month he will become just the second-ever non-Russian and non-American to lead the crew of the International Space Station.

Reddit was delighted with the AMA, which followed up a similar session held in August 2012 with US President Barack Obama.