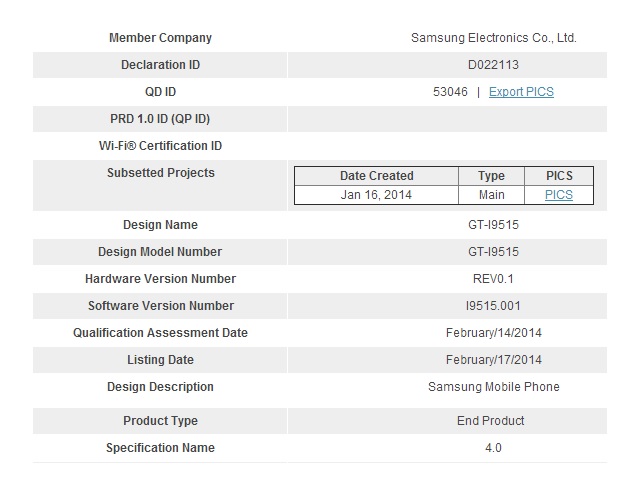 LatestÂ reports reveal that the Samsung Galaxy S4 Value Edition (GT-I9515) has received a Bluetooth SIG certification, hinting that the device might hit the market in the near future. Samsung, however, hasn’t officially announced the smartphone launch.

There isnât much information about Samsung GT-I9515 handset on the Bluetooth SIG website, but according to the previous leaks, the Galaxy S4 Value Edition will come in seven colors – white, black, brown, red, pink, purple and blue.

Further, it is said that the smartphone will match the features of Galaxy S4 and sport a 5-inch 1080p display with 441ppi pixel density and is expected to pack a 1.9GHz Snapdragon 600 processor with Adreno 320 GPU, 2600 mAh battery, 2GB RAM and 16GB internal storage. Samsung GT-I9505 will feature a 13 megapixel rear camera and 2 megapixel front camera.

The Galaxy S4 Value Edition (GT-I9515) is speculated to be the Galaxy S4 Neo, as the Korean company has already rolled out several Neo versions of the handsets in Galaxy lineup, including Samsung Galaxy Note 3 and Galaxy Grand. But it’s uncertain as this device carries “GT” model number scheme, instead of “SM.”

The Samsung GT-I9515 is expected to be hit the smartphone market in a couple of weeks as the rumors suggest that Samsung will unveil Galaxy S4 Value Edition (GT-I9515) at the MWC 2014.