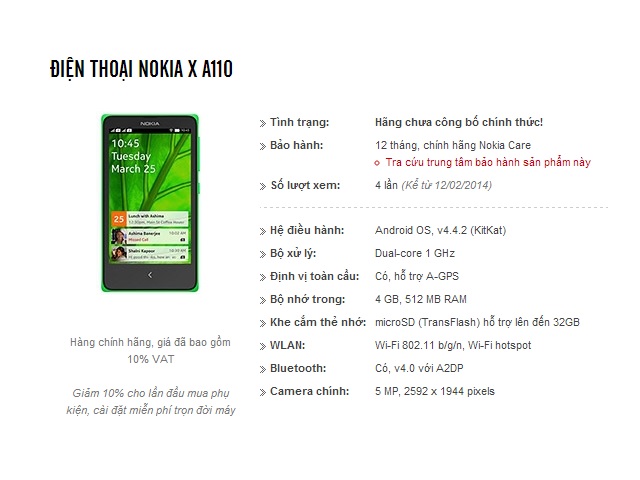 Nokiaâs highly rumoured and its first ever Android smartphone Nokia X was spotted on a Vietnamese retailerâs website only to be taken down shortly afterwards.

Nokia X was priced at roughly $110 and the specifications match what we have come across so far. According to Mainguyen listing (Google Cache) shows that the smartphone will be powered by Android 4.4.2 KitKat, 1GHz dual core processor, and 512MB RAM.

It is also rumoured that the handset will have 4GB internal storage, a microSD card slot for increased external storage, Wi-Fi 802.11 b/g/n, Wi-Fi hotspot, and a 5-megapixel rear camera.

The Android-powered smartphone is likely to see the light of the day at MWC 2014 and it is said that the Nokia X is be launched in emerging markets only where Nokia Asha range of smartphones are popular. It is believed that Nokia X will be publicly available in March.