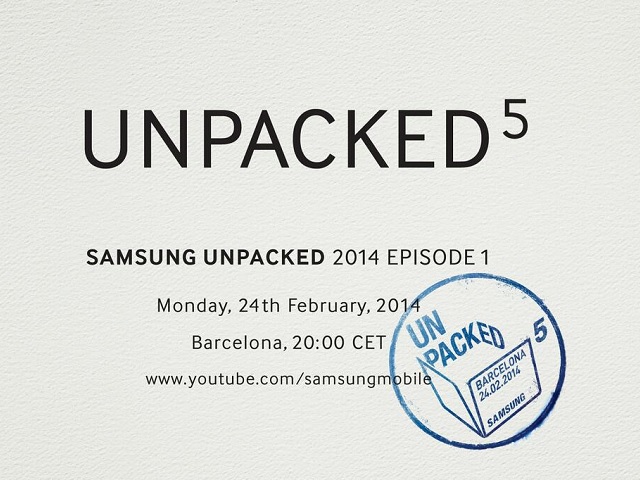 Samsung is expected to unveil a new version of its flagship Galaxy S smartphone, Galaxy S5, this month at the Mobile World Congress (MWC) to be held in Barcelona.

The South Korean tech giant has sent out invites to members of the press for its “Samsung Unpacked 5” event, which is slated for February 24th, the first day of MWC 2014. The event has been dubbed as Episode 1. Last yearâs Samsung Galaxy S4 launch event was also dubbed Episode 1, so this indicates that the company is likely to publicly debut its new flagship phone.

In an announcement made via company’s Twitter account yesterday, the use of “5” made everybody curious. This obviously could be the company’s simplest way of teasing Galaxy S5, its upcoming flagship device.

The news has come just in time when Samsung is bracing for its weakest mobile annual profit growth in the last seven years amid tough competition from Apple and other Chinese vendors like Lenovo.

The new flagship device is expected to come with a higher-resolution screen with a 2,560 x 1,440p AMOLED display, latest Exynos processor, 3GB of RAM, Android 4.4 KitKat, a 16-megapixel camera, fingerprint sensor and plastic body. A revamped TouchWiz user interface and the latest Android version 4.4 Kit Kat are other possibilities. The device could be available in 32GB, 64GB and 128GB storage variants.

Samsung is also set to unveil its first Tizen smartphone on February 23 as is evident for a press invite it sent out before a few days.