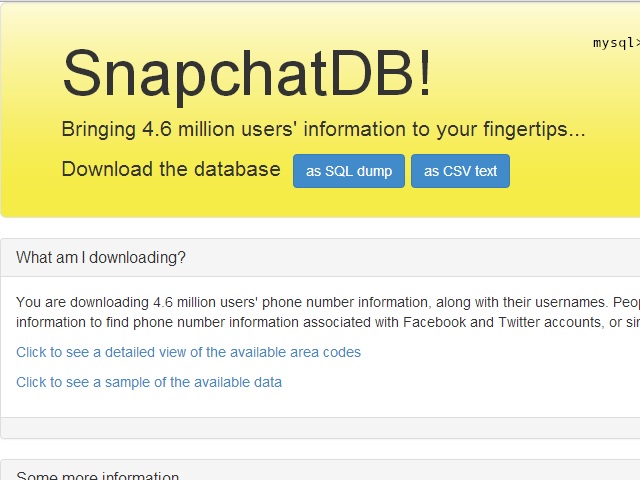 [03/01/2014 23:16 GMT]
We have heard back from the hackers and according to them SnapchatDB.info was taken offline because their “hosting provider was intimidated by the overwhelming public interest.”

“It wasn’t due to a legal issue”, the hackers added.

Further when asked whether they had more than 4.6 million records, the reply was affirmative.

SnapdchatDB.info was taken offline by its hosting service provider, but it is back online to hand out details of over 4.6 million users. Snapchat on the other hand revealed earlier in the day today that it will be tweaking its app to ensure better security.

Snapchat didnât heed to warnings from an internet security group and found itself in the middle of a controversy as another security group managed to scrape information of around 4.6 million users and posted it online. The company didnât offer any apology, but instead said that they will be releasing an updated app with extra security feature to ensure that such issues do not crop up again.

Snapchat chief executive Evan Spiegel on the other hand also spoke on the hack and said on the Today show: âAt the time, we thought we had done enough.â

Spiegel didnât offer any apology, but instead reasoned out that technology startups are vulnerable to unforeseen abuses. âIn a business thatâs moving so quickly if you spend your time looking backwards, youâre just going to kill yourselfâ, Spiegel said.

We have reached out to the hackers seeking information on why the site was taken offline and if they only have access to 4.6 million records or there is more in store. Do check for updates.