Russian embassy tweets: Or how not to run an effective propaganda on twitter 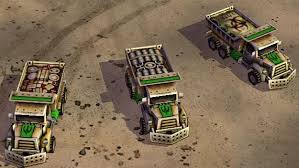 âIn Putinâs Russia, it is not game developers who use official Government images, but the Russian Government who uses old game images.â

That may sound like the lamest âIn Mother Russiaâ joke ever, but the facts surrounding it are lamer still. Getting your act wrong on Twitter these days is a sure-shot way to getting roasted in full public view. You can understand when celebrities and even businesses inadvertently find/put themselves in such situations. But what if you are the official twitter account of powerful government agency, and a diplomatic agency actively involved in propaganda?

The folks over at the Russian embassy twitter account have really shot themselves in the foot with this latest twitter fiasco. In a supposedly âseriousâ tweet âhighlightingâ the dangers posed by Syrian rebels acquiring chemical weapons in âbomb trucksâ, the Russian embassy in the UK actually used an image from a decade-old strategy game, the popular Command & Conquer: Generals. For a government actively invested in aiding and abetting the totalitarian Assad regime, their embassy folks couldnât be bothered to invest a little more time and energy into finding real-life file photos of a few actual dump trucks.

A cursory image search of âbomb trucksâ on Google throws up the in-game image among the top 5 results. In probability, somebody in charge of their tweets got incredibly lazy and decided to just pick up the first image they could lift off an online search.Â  But now they are paying the price, and how! Their credibility has been hit for a six, and the whole incident has become another one of those hilarious internet memes.

On further reflection though, it is rather fitting that the Russians ended up using an image from a game from the venerable Command and Conquer franchise. Their Red Alert series is a wonderfully zany, over-the-top take on the Cold War, filled with megalomaniacal dictators, absurd plotlines and live action videos filled with brilliantly camp humor.

In Command & Conquer: Generals, the actual game from which the image was taken, Russia is no longer a playable faction, having been eclipsed on the global stage by China and the GLA (a fictional take on ISIS, ahead of time by a few years).