Astrophysicists have Detected Category 77 Hurricane Winds Near a Black Hole 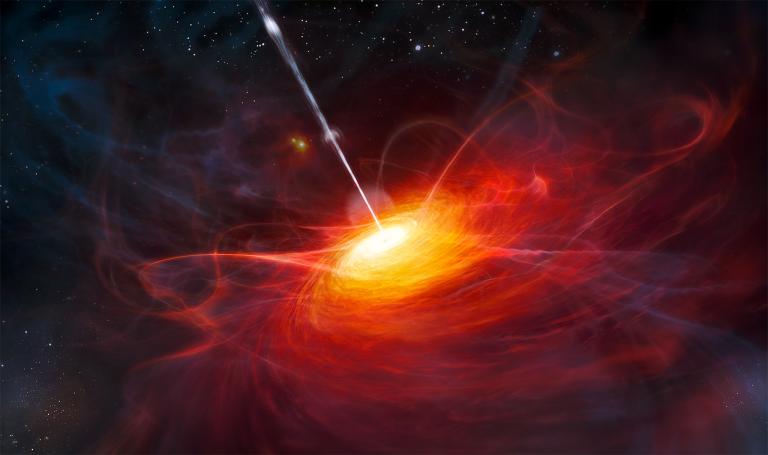 “We’re talking wind speeds of 20 percent the speed of light, which is more than 200 million kilometres an hour. That’s equivalent to a category 77 hurricane,” said Jesse Rogerson, an astrophysicist leading researchÂ aimed at better understanding outflows from quasars as part of his PhD thesis in the Department of Physics and Astronomy at York U. These powerful quasar winds, the fastest seen to date, were detected near a supermassive black holeÂ and could give researchersÂ great insight into the development of galaxies.

Quasars are the expansive discs of hot gas that form around supermassive black holes. These rings of gas are so large that they are greater in size than the Earth’s orbit around the Sun and have temperatures hotter than the surface of the sun. At times these formations emit quasar winds. While not “winds” in the way we think of them on Earth, the term quasar winds is used to give a mental image of how these emissions appear and function.

The quasars that surround black holes are the home of all of the particles and debris that the black hole’s crushing mass draws towards it. When a quasar wind forms, it carries these particles with it into the depths of space Ã  la Dust in the Wind. The particles carried on a quasar wind play a huge role in the formation of new galaxies.

“Quasar winds play an important role in galaxy formation,” says Rogerson. “When galaxies form, these winds fling material outwards and deter the creation of stars. If such winds didn’t exist or were less powerful, we would see far more stars in big galaxies than we actually do.”

To fully appreciate the speed that quasar winds travel at, we need to understandÂ that these winds have built up enough speed to escape the gravitational pull of the black hole and sometimes the surrounding galaxy, thus seeding the universe for the development of future galaxies far from the quasar wind’s origin.

“We not only confirmed this fastest-ever ultraviolet wind, but also discovered a new wind in the same quasar moving more slowly, at only 140 million kilometres an hour,” says York University Associate Professor Patrick Hall, Rogerson’s supervisor.

“We plan to keep watching this quasar to see what happens next.”