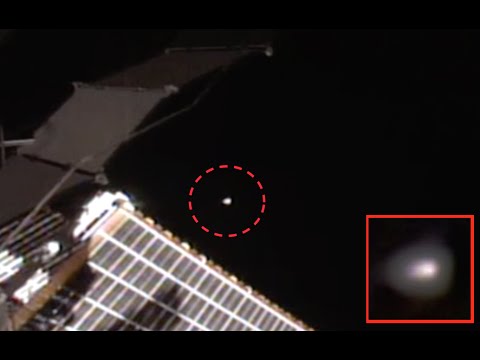 While space agencies across the globe are looking for evidence of extraterrestrial life, there are clues ‘as claimed by conspiracy theorists’ here on Earth and around the International Space Station (ISS) that point to their existence and whereabouts.

One such instance got alien enthusiasts all charged up when the live cam aboard the ISS captured a ‘glowing white oval’ as it was flying near the space station. According to Scott Waring of UFOSightingsDaily, the object had matched its speed with the space station and though the camera onboard the ISS zoomed in, it wasn’t able to identify what it was and knowing about the possible repercussions, NASA cut the live stream.

Waring says that he finds it important to keep an eye on NASA and its activities as it hides alien evidence rather than report it and that it cannot be trusted. The UFO and alien enthusiast is always in the headlines for some or the reasons – mainly because of bizarre sightings on Mars – bear, dogs, ducks and swans, god statues, among others.

In Waring’s own words:

“I was watching the space station live cam when I noticed the camera switch to a new camera. Then the camera began to swing to the left until it focused on a white oval between it and Earth. The object had matched its speed with the space station. The camera then continued to zoom closer and closer, but all we could see was a glowing white oval. The vibrate light from the UFO was so powerful that even NASAs new seven million dollar HD cameras could not focus on it. Foo fighter checking out the space station?”

The alien enthusiast says that he will be contacting NASA through some of its twitter handles to probe for possible explanation. Waring even contacted the UN last time around when he says he sighted a bear on Mars and wants the international organization to get involved as the US government and NASA are hiding the truth.