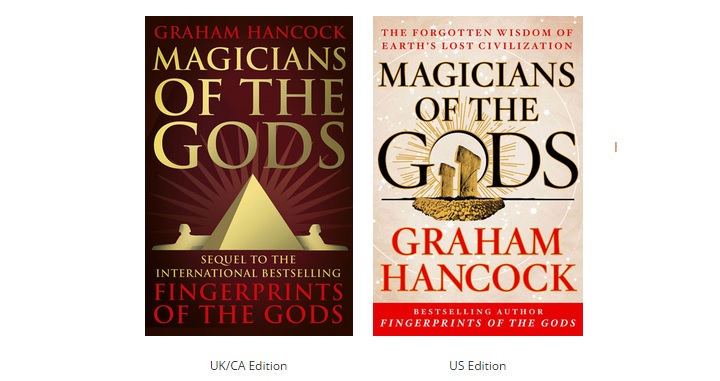 The highly-anticipated sequel to Graham Hancock’s Fingerprints of the Gods, Magicians of the Gods is releasing in the UK on September 10.

Hancock says that the new book is by no means an ‘update’ to the Fingerprints of the Gods, but is rather a completely new book that packs new evidence based on his new travels to some of worldâs most mysterious archaeological sites.

Through the book Hancock claims to provide completely new insights, based on the latest scientific evidence, into the global cataclysm that wiped an advanced civilization from the earth and made us a species with amnesia, forced to begin again like children with no memory of what went before.

As he has revealed on multiple occasions, a giant comet entered our atmosphere near the end of the last Ice Age 12,800 years ago, broke into multiple fragments, some of which struck Earth causing a global cataclysm on a scale unseen since the extinction of the dinosaurs. At least eight of the fragments hit the North American ice cap, while further fragments hit the northern European ice cap.

These impacts caused huge amounts of heat which instantly liquidized millions of square kilometers of ice, destabilizing the Earthâs crust and causing the global Deluge that is remembered in myths all around the world, Hancock says.

This was not it, as Hancock reveals in his new book that there was a second series of impacts, equally devastating, that caused further flooding some 11,600 years ago and this is the exact date that Plato gives for the destruction and submergence of Atlantis.

Hancock claims to provide evidence that he says shows beyond reasonable doubt that an advanced civilization that flourished during the Ice Age was destroyed in the global cataclysms between 12,800 and 11,600 years ago.

However, according to Hancock, all was not lost as there were survivors who were later known as ‘the Sages’, ‘the Magicians’, ‘the Shining Ones’, and ‘the Mystery Teachers of Heaven’ depending upon the culture they went to and settled in.

They travelled the world in their great ships doing all in their power to keep the spark of civilization burning. They settled at key locations â Gobekli Tepe in Turkey, Baalbek in the Lebanon, Giza in Egypt, ancient Sumer, Mexico, Peru and across the Pacific where a huge pyramid has recently been discovered in Indonesia. Everywhere they went these âMagicians of the Godsâ brought with them the memory of a time when mankind had fallen out of harmony with the universe and paid a heavy price.

To find out more about what Hancock has to say about this global cataclysm, you can get hold of a copy of Magicians of the Gods here.