Apple iPad Air get a teardown treatment; twice as easy to repair as Surface 2 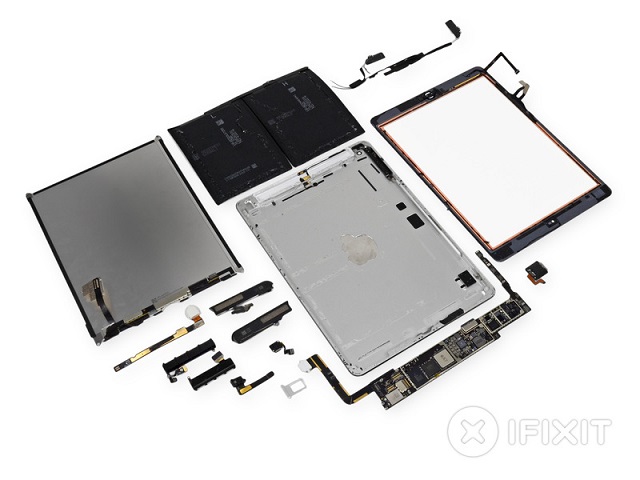 Teardown experts at iFixit have taken apart the iPad Air and have given it a repairability score of 2 â twice the score of overly irrepairable Surface 2, which managed to score just 1.

This doesnât mean that iPad Air is easy to repair as the score is lowly 2 which means that those who try to remove the different components in a bid to replace iPad Airâs innards are at risk of breaking the components.

The teardown report confirms the dimensional details â â20% thinner, 28% lighter, and 24% reduced in volume from the 4th-gen iPad.â The teardown reports does note that the Apple has put in copious amounts of adhesive to keep everything in place; however, it was a close call when compared with the Surface 2.

Just underneath the display is the two-cell lithium-polymer battery, which provides 32.9WHr of juice; however, this is over 10WHr less than the 43WHr three-cell “behemoth” present in the iPad 4. Despite this reduction in capacity, Apple claims that the iPad Air is still capable of providing users with 10 hours of battery juice allowing them to surf the web, watch videos and listen to music. iFixit notes in its teardown report that âThis is the most difficult battery removal procedure we’ve seen in an iPad.â

Apple hasnât glued iPad Airâs logic board and the removal was quite easy and quick. One thing that the team notices though is that the A7 in iPad Air is marked with APL5698, while the A7 in iPhone 5S is marked with APL0698. Does this mean that Apple has worked up improvements in the processor for the iPad Air? Seems so, because the A7 in iPad Air is clocked at 1.4GHz while the same has been clocked at 1.3GHz in the iPhone 5S.

Some of the other components include: