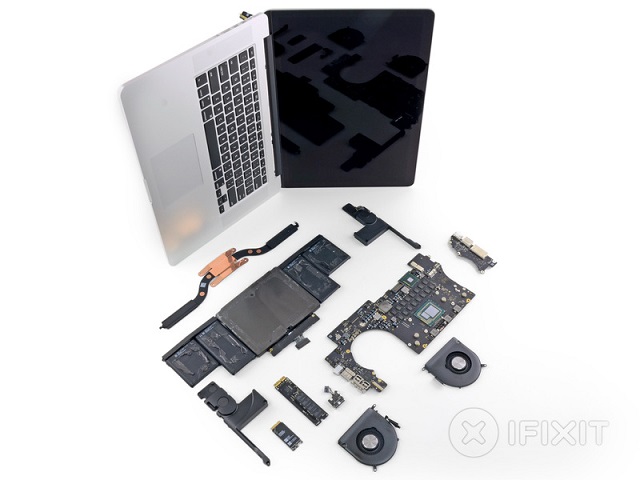 Teardown experts at iFixit have taken apart the recently released 15-inch Apple MacBook Pro with Retina display and have given it a repairability score of just â1â.

Some of the major updates received by the MacBook Pro with Retina display include quad-core Intel Haswell Core i7 processor clocked at 2.0GHz, Intel Iris Pro Graphics, and 802.11ac Wi-Fi wireless networking. Some of the other features of the laptop are 8 GB of 1600 MHz DDR3L onboard memory, 256GB PCIe SSD, 720p FaceTime HD camera, and Bluetooth 4.0.

iFixit notes that the heat sink of the latest MacBook Pro is more sleek and comes with just a single thermal pad because of the integrated GPU â something it attributes to the âHaswellification” process.

The RAM is soldered onto the logic board, which means that is no option to upgrade the RAM once you have bought the MacBook Pro. Further, the PCIe SSD is a separate daughtercard and chances are that there could be upgrade offers in near future.

The thing that iFixit is not happy about is the fact that the battery has been glued using excessive adhesive âand is just as nearly-impossible to safely remove as before.â The battery covers the trackpad cable and the team notes that this placement âtremendously increases the chance that the user will shear the cable in the battery removal process.â

Last but not the least â the entire display assembly is fused and there is no glass protecting it. If one of the component fails inside the display users will have to âreplace the entire, extremely expensive assembly.â