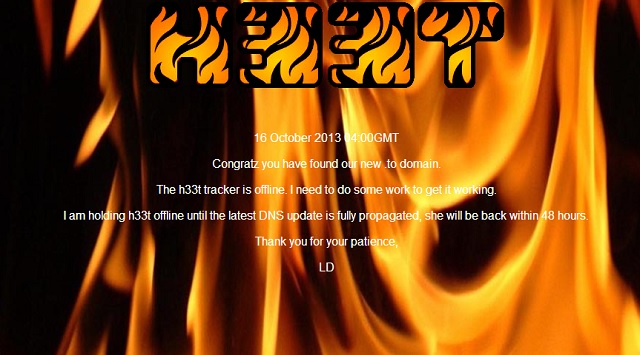 H33t has found a new home after both its primary domains â H33t.com and H33t.eu â were seized in matter of few days.

H33t.to, a domain of the island of Tonga, shows up the all familiar image of flames with a message stating that the tracker is offline and that work needs to be done to get the tracker up and running.

âCongratz you have found our new .to domain. The h33t tracker is offline. I need to do some work to get it workingâ, reads the message on the new domain. The message dated October 16 also notes that the H33t will be offline up until the DNS has fully propagated across the internet. This means that the tracker should go live anytime today or tomorrow.

H33t.com was seized at the beginning of September following which the torrent tracker moved onto .eu domain which was also sized on September 28.

In other torrent indexing and tracking website news, IsoHunt.com founder Gary Fung has settled with the MPAA outside of court and the website will be taken down sometime this week. Under the terms of the settlement Fung will also pay $110 million to MPAA.