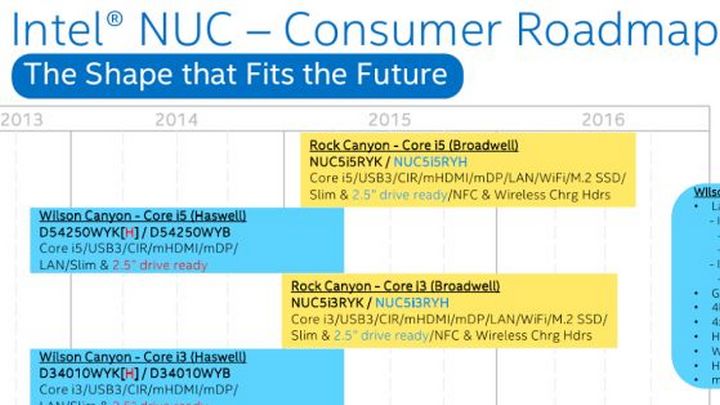 Drawing more attention to the mini PC range is Intelâs next in line NUC 2.0 for those with the need of a powerful device for processor-intensive tasks.

Intelâs Next Unit of Computing NUC 2.0 comes as the upgraded version of the first Intel NUC. The leaked slides reveal 2 products supporting hardcore gaming with new parts and technology added to them.

The spec shown includes a Core i3, i5 Broadwell or Braswell chips with DDR3 RAM supporting 8GB or 16GB based on the model. It will also likely include Intel HD graphics. A Steam hardware survey has revealed that Intel HD graphics is the most used element on the service and hence it could really benefit gamers.

While the GPU models are not revealed in detail, they seem to sport 4K output and perform well as home theatre PCs. NUC 2.0 seems to have opted out of the customary 2.5-inch SSDs for M.2 drives which can be connected to specialized RAM.

It would have 4 USB 3.0 ports, a mini HDMI, 2 USB 2.0 internal ports, a mini DisplayPort Connector, and a headphone and microphone jack. Included in this list is the optical audio which seems to have been saved for the higher end model.

Intel seems to have made some colourful case lids that can be mixed and matched for those users who prefer their Home Theatre PCs to reflect the theme of their living room. The slides hint at a 2015 release without any mention about the price. The chip maker also has plans to introduce some entry level PCs in the middle of 2015 with Celeron or Braswell Chips for use as Home Theatre PCs and light mainstream gaming devices.