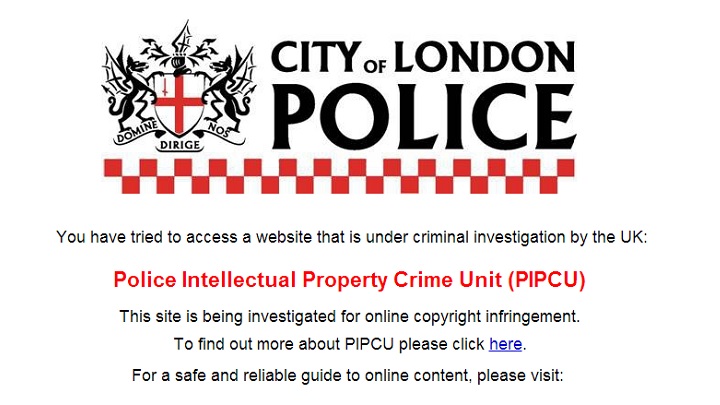 âThe Police Intellectual Property Crime Unit has arrested a man in Nottingham on suspicion of running an âumbrellaâ website providing access to other websites which have been subject to legal blocking ordersâ, announced PIPCU in a news release.

The unnamed man was arrested in Nottingham and was later released on bail. PIPCU said that the man voluntarily handed out names of the sites and related web pages and all of them now show a police warning banner.

PIPCU revealed that the arrest is part of an ongoing operation â Operation Creative â under which the police is seeking a clamp down on websites involved in hosting, distribution or providing access to copyright infringing content.

PIPCU has been highly active since it was established and has resulted into a ban of multiple sites known to be involved in distribution and hosting of copyrighted content. Earlier this week, police banners started surfacing in Immunicity as well as multiple other proxy sites including Piratereverse.info, Kickassunblock.info and Katunblock.com.

These proxy sites allow those in the UK to access blocked sites like thepiratebay.se, kat.ph and other such sites that have been blocked by court orders.

As of now visitors to Immunicity and other such sites see a banner warning them that they have tried to access a website that is under criminal investigation by PIPCU. “This site is being investigated for online copyright infringement,” it reads.

In a related operation â Operation Sunblock â the PIPCU started removing adverts appearing on copyright infringing websites and replacing them with pop-ups alarming users that the website is under investigation by the police for copyright infringement and that they need to exit the websites immediately.