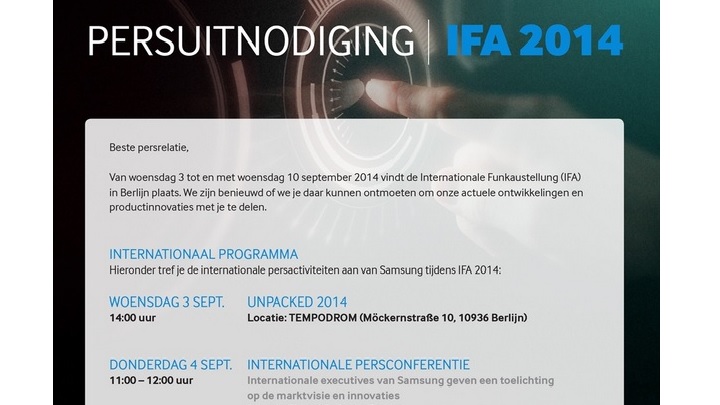 Samsung has sent out invites for its Galaxy Note 4 launch event scheduled on September 3 before the IFA 2014 kicks off proving rumours about an eminent pre-IFA launch true.

Expected to be unveiled in two different variations â one with a bendable screen and other sporting a traditional flat display â the Note 4 is said to be stuffed with some of the best hard components one can find on the planet on consumer devices.

Read More: Samsung Galaxy Alpha yet to be launched, but pre-orders accepted

Just a few days back we saw an APK list leak that revealed almost all the features of the Galaxy Note 4. According to the list the Note 3 successor will have âVoiceNote4T,â âSamsungLinksoftware,â and âSamsungMusic_20,â which are sort of self-explanatory, have made their way to the device. âPhotoTable,â âOutOfFocusViewer_WQHD_K,â âPhotoStudio_WQHD_Kâ and âSmartSelfShotâ APKs suggest that the Korean giant is planning for some improvements in camera.