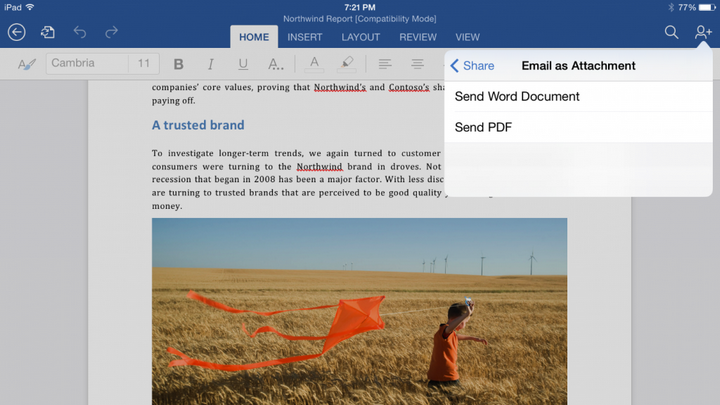 Just 4 months after the release of Office for iPad, Microsoft on Thursday rolled out a major and significant update for its productivity suite, bringing a series of new features, making it a bit more like its desktop counterpart.

The Office for iPad version 1.1 includes support for third party fonts, new tools to edit images, ability to export to PDF format that were widely requested for the three apps – Word, Excel, and PowerPoint.

The new Excel for iPad version 1.1 comes with pivot tables feature that allows interaction with tables with the source data in the same workbook, support for external keyboard to make it even easier, flick to select option that allows users to quickly and easily select the entire data in a column or row just by flicking a cell’s selection handle in any direction, and ability to print workbooks with more paper sizes and scaling options.

The version 1.1 PowerPoint adds a new presenter view that allows users to view and edit notes, check next slide, during presentation, the ability to play media including videos, sound effects and music while presenting, insert videos directly from the camera roll, add hyperlinks to the presentation, erase highlights and drawings.

The Word for iPad update hasn’t gained any new features apart from the Fonts, ability to send PDFs, and Picture Tools. Office for iPad has already proven to be successful for Microsoft, as the company announced its is Q4 earning call last month that the suite has been downloaded around 35 million times, since its launch in March.

Microsoft’s Office for iPad is available for free that allows users to view files. However, for editing documents, users will have to subscribe to Office 365 Home, available in in-app purchase.