Facebook: we will reduce ads in your newsfeed as we know they are annoying! 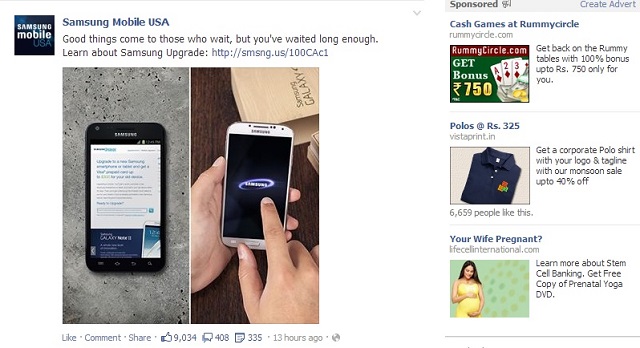 Facebook has acknowledged that its ad targeting technology is annoying users and has confirmed that it will be upgrading its algorithm in a bid to improve the quality of the ads that its usersâ see.

The way the ads currently work is that users see one paid ad injected into their newsfeed for every 20 stories. Facebook claims that a userâs behavior tells its algorithm about the preferences of a user. If a person interacts with the ad by either clicking on it or sharing it or liking it, the algorithm learns that the ad is relevant to that particular user. On the other hand if the user decides to hide the ad from the newsfeed, it means that the person wants to see less ads of such type.

Back in May Mark Zuckerberg, during an earnings calls, had revealed that its users were satisfied with all the content including the ads that they saw in their newsfeeds. However, just five months down the line the company has expected that its ad targeting technology does indeed some reworking. âWe are currently working on some updates to the ads algorithm to improve the relevance and quality of the ads people seeâ, notes Hong Ge, one of the managers in charge of ads at Facebook, in a blog post.

According to Ge, the changes will be applied in the âcoming weeksâ, and that it will be âplacing more emphasis on feedback we receive from people about ads, including how often people report or hide an ad.â

One thing that stands out in the blog post is that if Facebook will pay âmoreâ attention to user interaction now, what was it doing up until now? The âmore emphasis on feedbackâ is what remains unexplained in the blog post!