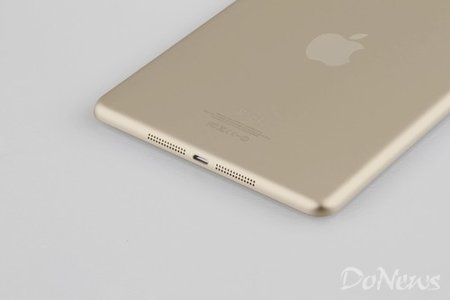 Sonny Dickson is at it again and this time itâs about the new iPad Mini 2. Dickson has claimed through a series of tweets that Apple will equip its iPad Mini successor with some of the unique features of iPhone 5S.

According to Dickson, the iPad Mini will feature the TouchID fingerprint sensor, the 64-bit A7 and M7 motion coprocessor and will come in three colors â Space Grey, Silver and the highly acclaimed Gold.

Dicksonâs revelations may not be too surprising as the success of iPhone 5S gold implied that Apple will definitely have gold as one of the colors for all its future iDevices. Further TouchID has managed to garner rave reviews from consumers and analysts alike and inclusion of this fingerprint sensor is something everyone would expect.

However, one wouldnât mind a photographic evidence of the above rumoured specs and Do News provides one right when it was needed. The photos confirm Gold iPad Mini 2 with TouchID, but they donât provide any information about the type of display the tablet. It was rumoured earlier that the iPad Mini 2 will feature a Retina display. There is no official word from Apple regarding the launch dates so we take all of these rumours as a grain of salt, but considering that Apple wonât let a whole year go by without upgrading the iPad Mini, we may not be too far out from the possibility that some if not all the above leaks are true.