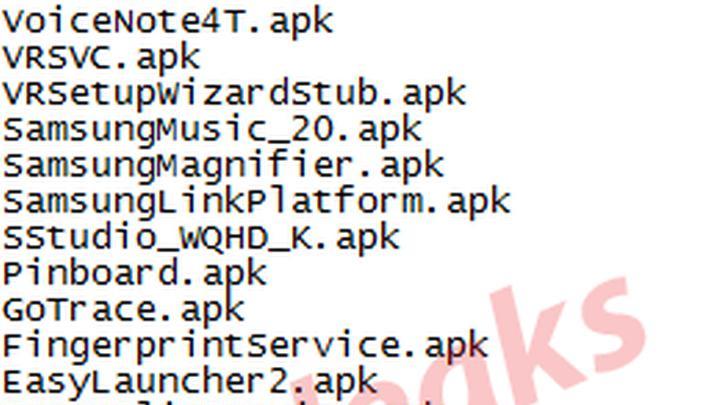 Previous rumours of Samsungâs much-awaited Galaxy Note 4 phablet, slated to hit the shelves by the end of this year, has been listing bits and pieces of handsetâs features and specifications, but the latest leak reveals a list of APK files, suggesting the launch to be a bit closer.

evleaks, an infamous tipster, has posted a list with the various APK files, said to be the files in app packages installed in the upcoming device.

According to the report, the usual features âVoiceNote4T,â âSamsungLinksoftware,â and âSamsungMusic_20,â which are sort of self-explanatory, have made their way to the device. âPhotoTable,â âOutOfFocusViewer_WQHD_K,â âPhotoStudio_WQHD_Kâ and âSmartSelfShotâ APKs suggest that the Korean giant is planning for some improvements in camera.

The list also includes âFingerprintService,â indicating that the company is bringing the Galaxy S5 fingerprint reader to the Note line-up. âSStudio_WQHD_Kâ in the list implies that the Galaxy Note 4 will sport the rumoured WQHD display, with a 2,560 Ã 1,440 resolution.

The âSHealth3_5â APK reaffirms the companyâs focus on its health-tracking software. Galaxy Note 4 is expected to be the first device to sport ultraviolet sensor, integrated within the S Health app.

The Korean giant is expected to unveil the Virtual reality device Gear VR along with Galaxy Note 4 at the IFA Technology trade show scheduled to be held in September this year.