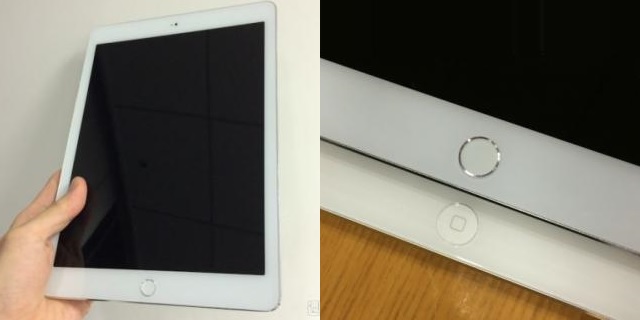 The next touchscreen tablet of Apple continues to generate queries when it should be submitted at the back along with the new range of iPhone. And new photos are again fleeing on canvas.

This year’s models are definitely at the coast, and after discovering a host of performances across the assumed iPhone 6 it was the turn of the iPad Air 2 to experience.

The Japanese site ASCII Plus has published some photographs in high definition of iPad Air 2 currently described through rumors and shared by Apple suppliers as information and accessory manufacturers with other elements ratings and allowing them to develop, for example, protective covers.

This is not the first model of its kind that can be seen, but this confirms other elements already presented in the past, namely a thickness of device still down. The iPad Air was already late, it will be even more in the next version.

We also discover some slight changes, especially at the volume buttons, which will fit in a hollow on the edge, that never exceeded the chassis.

The presence of the Touch ID biometric module also confirms that it was always positioned at the front and integrated at home button. It will identify with its fingerprints, Apple consider pushing developers to use this feature more in their future applications.

According to the site, the next screen of iPad Air will remain unchanged, it will offer a resolution of 264 ppi for a definition of 2,048 x 1,536 pixels resolution.

Internally, things could change, since the iPad Air 2 could host the next Apple A8 processor and a 8MP camera on the back. The question is whether other elements will be confirmed in the coming weeks.