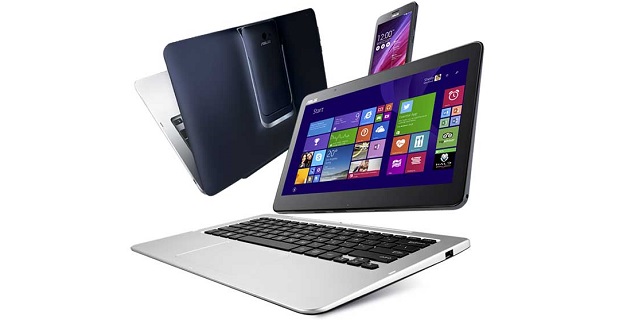 Transformer Book V is the Taipei based companyâs latest attempt to get around Microsoft and Googleâs objection against Windows Android dual-OS as it can be a Windows and Android device when you need it to be.

The Asus Transformer Book V packs a smartphone and a tablet with keyboard dock. The smartphone runs Android while the tablet runs Windows 8.1.

The 5-in-1 amalgamation attempt of Asus materialises as follows: the smartphone runs Android 4.4 KitKat and docks onto the tabletâs rear. The tablet runs Windows 8.1 and when the smartphone is docked, it will act as an Android tablet if you need it to.

Further, when the entire smartphone tablet assembly is docked onto the keyboard dock, you can either have a Window laptop or an Android laptop.

On the specification front, the smartphone is powered by a quad-core 64-bit Moorefield Atom SoC with integrated LTE; 2GB RAM; 64GB internal storage; and 5-inch display with 1,920 x 1,080 pixels resolution.

The tablet on the other hand packs an Intel Core processor; 12.5-inch display with HD resolution; 4GB RAM; 128GB storage if in tablet mode and 1TB storage.

It will be interesting to see the consumer affinity towards such a device. Let us know in the comments section of what you think about Transformer Book V.