Google Now, the end for Siri? 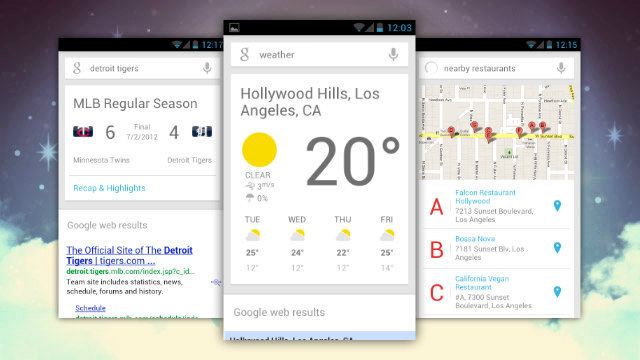 Itâs always a tough decision, when you have to choose between two things, both of which are really great. When such a quandary arises, it always better to chalk out all the great things about each of them, so you can make an informed decision. Things get really complicated though, when you realize one list is as long as the other.

By now, every tech buff knows that Google Now has been launched by Google on the iOS platform to upstage Siri-the assistant that helps people manage their lives on Apple’s iPhone and iPad. Itâs a duel to the death many would say and only one shall survive.

The duel began with the release of a free iPhone and iPad app that features Google Now, which functions in a similar fashion to Siri. For the first time, Google Now is available on tablets and phones, which do not run on Googleâs Android software.

Google Nowâs foray into the world of iPhones and iPads can be considered a way for it to lure customers away from Siri, an indigenous service from Apple.

Google Now many would say has an edge over Siri because it has the power of the Google search engine behind it. It will keep showing you relevant information through the day, in the form of âcardsâ. It covers everything from weather alerts to public transport details and everything in between.

Google Now fortunately is a part of the Goggle Search app, which is why it has Googleâs voice search capabilities integrated into it. You can ask the absurdist of questions to this tool and might end up getting an answer to satisfy you. “The more you use Google Now, the more you get out of it,” software engineer Andrea Huey emphasizes in a blog post.

Many would argue that Siri too does all of this and a hundred other things that Google Now does. But, you also have to consider the fact that Google Now has been launched on the iOS platform to compete with Siri. Which means, Google has tweaked this tool just enough, for it to have an edge over Siri, or there wouldnât be any sense in launching Google Now on iOS in the first place.

Upon using Google Now on an iOS, one might realize that although it has the same features as Siri, the usability factor has been upped a bit more. A counter argument to this would be the fact that Apple wonât sit twiddling its thumbs, while Google tries to edge out Siri, which is its pride and joy. Therefore, in the next version of the iOS, one might experience a completely revamped avatar of Siri, which might be miles ahead of the present Google Now.

In retrospect, Google entering Appleâs domain would lead to a healthy competition, which would in turn benefit the consumer. The question remains though, will Google Now eventually be the death of Siri?