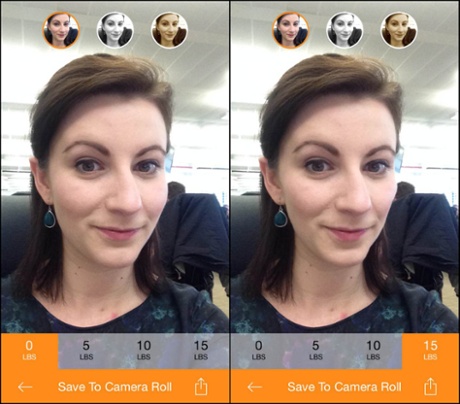 A new app dubbed SkinneePix lets user edit their selfies to look 5lbs, 10lbs or 15lbs slimmer with just the click of a button. The app is available for download on Appleâs App Store for $0.99, with an Android version of the app to hit the PlayStore sometime later this month.

The app’s description on appstore read âSkinneePix makes your photos look good and helps you feel good. It is not complicated. No one needs to know. It is our little secret.â

Developers of the app, Phoenix-based Robin Phillips and Susan Green, said they came up with the app after hearing their friends complain about not looking right in their selfies.

Robin and Susan claim that the app could motivate its users to be healthy by showing them how they would look like after losing a few pounds. However, this app can be used only for individual photos.

âWe are just removing the 10 to 15 pounds a camera can add because of bad lighting, shadows, bad lenses, to name a few challenges. People told us what they want, they want the pictures to be a real representation of what they look like, and that is what we have tried to give them,â Phillips said.

âWe did not build this app to address body image (Since it doesnât alter the body) but if it gets people talking in the right direction about taking their health seriously, well then we are all for that.â

Susan Green said she uses the “playful” app as a motivation to lose weight. âIt’s not that I don’t like how I look, I just need to be healthy. And this is how I want to try to do it.â

The reaction of reviewers has been broadly positive, saying that it promotes ‘healthy photo editing’, rather than the drastic Photoshopping used by national retail brands.