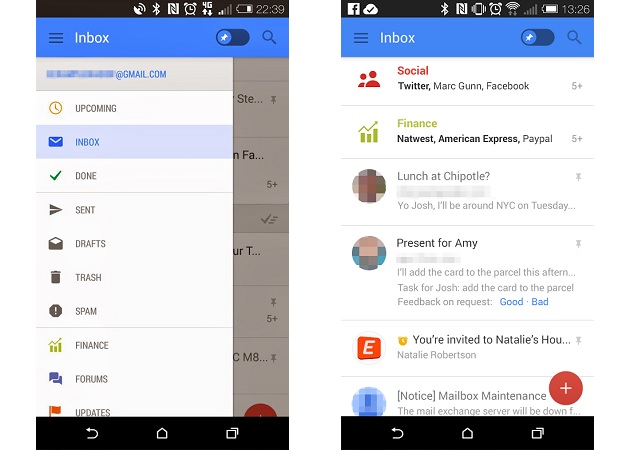 Google is testing a bunch of new features for the mobile version of Gmail to make it more organised and user-friendly including three new tabs, a snoozing option and a pin button, new reports have claimed.

The new tabs include Travel, Purchases, and Finance in addition to the already existing tabs namely, Social, Promotions, Forums, and Updates. The new tabs appear on the top of the window when there are new mails in those tabs otherwise they are tucked away in the side menu.

Overall the new interface of Gmail for mobile has a much cleaner look thanks to the ample of whitespace – as it evident from the leaked screen hosts.

According to Geek.com, there is also a snooze feature on the new Gmail that is more likely to get more attention. Snooze lets you mark an email as read temporarily after which it will resurface to the top as an unread mail. You can choose to snooze emails several times in a day or even for days or weeks depending on the importance of the emails.

If you will have to refer information from an email frequently or you have received an email which is extremely important to you but you want to respond to it later, you can have it pinned to the top of all other emails using the pin feature.

When you pin an email, it will stay afloat until you remove the pin on it after which it will sink down to its default position.

It is also rumored that Google is just trying to imitate the features of Dropboxâs email service, Mailbox. Apparently, Mailbox was the first to introduce the Snooze feature.

These features are just what we can guess from the leaked screenshots and Google may be having more features up its sleeve to surprise its users. There are also possibilities of these features being introduced in Gmail’s web interface soon.