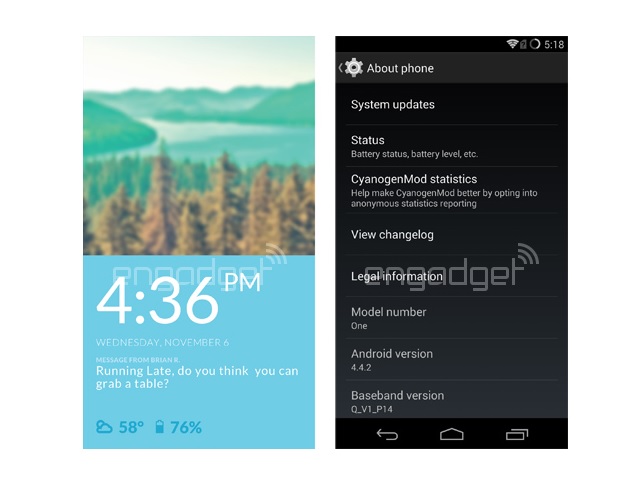 Four months after the launch of Oppo N1 CyanogenMod Edition, Team Douche (formally, CyanogenMod Team) have made it to the headlines again drawn some media attention with screenshots of what seem to a ported version of CyanogenMod running on the OnePlus making it to the web.

Despite being a new player there has been a lot of hype about OnePlus and the smartphone, which the company is set to launch on April 23. Little is known about the ‘One Phone’ from OnePlus except that it is going to be running Android. However, recently released screenshots point towards a version CyanogenMod called the 11S.

CyanogenMod 11S, seems to be a branch of CM11 (Android 4.4.2) with some carrier centric code commits. Apart from this, CyanogenMod 11S shares all the UI elements, including the lockscreen and the notification, and looks pretty identical to the stock version.

With OEMs bloating the operating system with resource hogging apps and interface tweaks, a lot of users have turned towards stock AOSP (Android Open Source Project) ROMs like CyanogenMod for a much original Android experience.

Although it’s not sure if the OnePlus One would be released with an unlocked boot loader, there have been rumours about a developer edition of the phone.

With users now having the option to choose from quite a few devices that run factory installed ‘close-to-stock’ AOSP ROMs, it is time that OEMs reconsider the changes that they make to the operating system.

It’s too early to speculate if the OnePlus One will share the same success as the Oppo N1, nonetheless, it is great to see smartphone manufactures opting for community driven ROMs. Although there is a lot at stake for OnePlus, the future seems to be bright and CyanogenMod 11s sure is another feather in Team Douche’s hat.