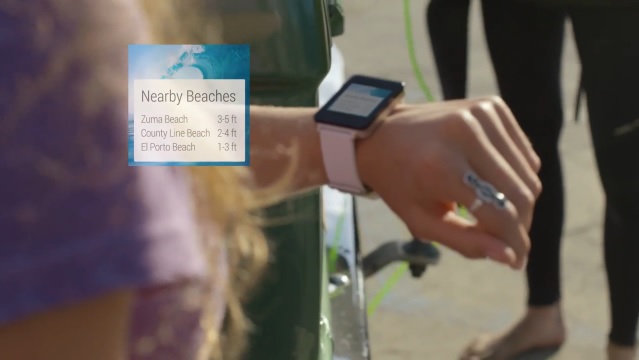 Google has finally announced its entry into the wearables world with its project Android Wear that extends Android to wearable gadgets.

The OS, based on Googleâs intelligent-personal-assistant voice operated technology called âGoogle Nowâ, will initially be applied to smart watches, but will make its way to other wearables in future if the new platform proves successful. The watches will also connect with Android smartphones.

Coming to features, Android Wear will give straight answers to spoken questions such as the departure time for a flight or the number of calories in a guava or even the latest score in a match.

Saying âOk Googleâ followed by a command in natural language will allow a user to book a taxi, send a text, make a restaurant reservation or even setting an alarm.

The wearable will also display notifications, posts and updates from userâs favourite social, messaging, shopping, news, chat and other apps.

Additionally, Android Wear will come loaded with a lot of health and fitness apps delivering realtime fitness data. Finally with an Android Wear device would enable users to access and control other devices connected to it, including playing a music playlist on the userâs phone or casting a movie to the TV.

Developers can have access to the Developer Preview for Android Wear to start working on apps for watches powered by Android Wear.

Google is already signing up deals with LG, Motorola, Asus, Samsung, HTC, Intel, Qualcomm, Fossil and MediaTek for manufacturing Android Wear devices. In fact the first to bring a smart watch running Android Wear in the market is LG which its G Watch.

Google has also released a promotional video showing off what the gadgetâs interface will look like.