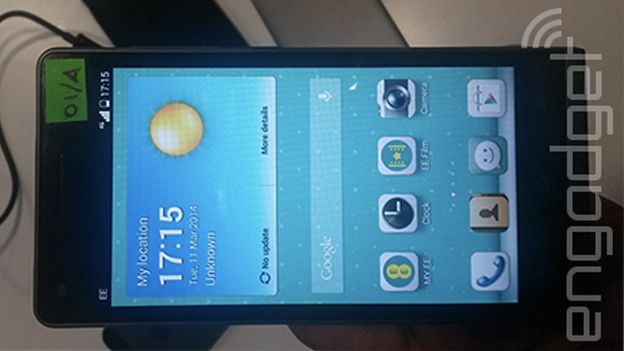 Everything Everywhere is going to launch own-branded low-cost 4G smartphone in the UK to cement its position as the top network mobile operator, a new leak indicates.

A snap of a smartphone obtained by Engadget shows off a generic Android smartphone skinned with EEâs aqua colour scheme. The home screen is loaded with EE apps and the same picture also shows the purported back plate of the smartphone carrying EE branding.

Extensive details about the handset are missing, but one bit of information that is available is that the handset will support Cat 4 LTE technology allowing it to take full advantage of peak 4G speeds available across the UK.

âOur current focus is on delivering the UKâs best value 4G service to consumers and businesses,â an official EE spokesperson told TrustedReviews. âAs part of this, we regularly review new products and services for our superfast 4GEE network, but we do not comment on rumour or speculation surrounding these.â

Everything Everywhere will be the first mobile operator to launch own-branded 4G handset with Vodafone planning to release one of its own sometime this year.