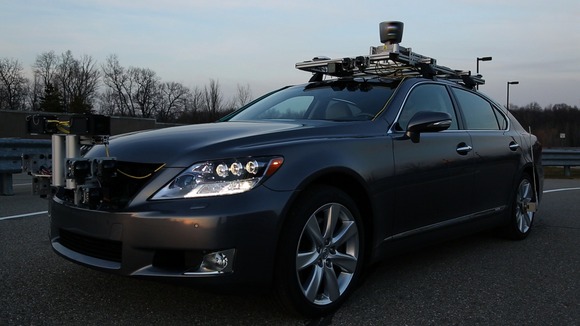 Car giant Toyota has given a sneak preview of plans to introduce self-driving car technology to improve road safety.

A video clip was posted on the Lexus (a division of Toyota Motoring) website of a Lexus LS fitted with ‘Intelligent Transport Systems’ (ITS) technology, which includes safety features designed to minimise car crashes.

The timing of the clip post comes ahead of the Consumer Electronics Show (CES) due to take place in Las Vegas next week.
The car features cutting-edge technology including on-board radar and video cameras to monitor the road, the surroundings, and the driver and the car can also communicate with other vehicles.

A spokesman from Toyota said: “We’re looking at a car that would eliminate crashes. Zero-collisions is our ultimate aim.”
The spokesman added that the ‘advanced active safety research vehicle’ prototype uses ITS and existing Toyota technology to monitor if the driver is asleep or awake, to keep the car on the road, and to come to a stop at traffic signals.

The car can control itself but the technology is designed to be used in conjunction with the driver.

The technology can detect the positions of pedestrians and obstacles via a series of optical beacons on the roadside and information is relayed to the prototype about the colour of the traffic lights, as part of ITS. The car can also independently monitor pedestrians’ positions.

Toyota has also created technology which allows a car communicate with the driver’s smartphone to offer augmented reality features.
It’s not just Toyota that has been working on self-drive road safety technology. Audi and Volvo have also been researching autonomous vehicles.
In 2011 Google was awarded an autonomous car patent and secured a Nevada driving licence for its self-drive car in May 2012.

The future is bright but how long it be before self-driving cars are a permanent fixture on our roads?