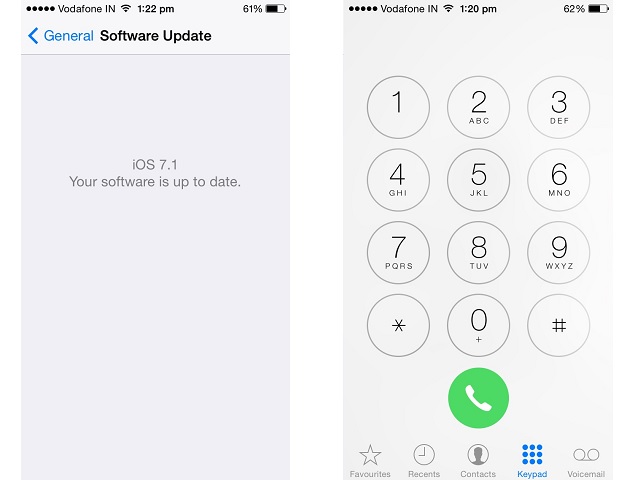 An iOS 7.1 update has been unleashed by Apple on Monday that will see a number of changes and additions landing on iPhone, iPad and iPod iOS user interface.

The long awaited update squashes a bug dubbed as the “black/white screen of death”, which led some Apple iOS devices to randomly crash and restart, and also brings with it several user interface tweaks including visual changes made to the phone dialer and enhanced power-off features.

The incoming call interface as part of the update will have separate decline and accept circular buttons below the Remind Me and Message option icons.

CarPlay offers a smarter, safer way to users to make calls, get directions, or play music from their iPhone while driving a car.

Some of the new Ferrari, Mercedes-Benz, and Volvo car models will support CarPlay, while other big names including Ford and BMW, are promising to integrate CarPlay with their future in-car entertainment systems.

The new update also adds some new options for Siri. Previously, users were required to hold down the home button to activate Siri, but now they can continue holding the home button to ensure Siri listens for longer and doesn’t cut off any pauses same as like the push-to-talk feature on walkie-talkies.

Other minor changes include addition of a list of events to the month view in the Calendar app, a new camera feature for iPhone 5S users that automatically takes a high-dynamic-range (HDR) photo when appropriate and improvements to the TouchID fingerprint sensor making the device works more quickly and reliably.

The latest iOS 7.1 update is available immediately. To install iOS 7.1, users just need to go to their Settings app, tap “General” then “Software Update” on their devices.