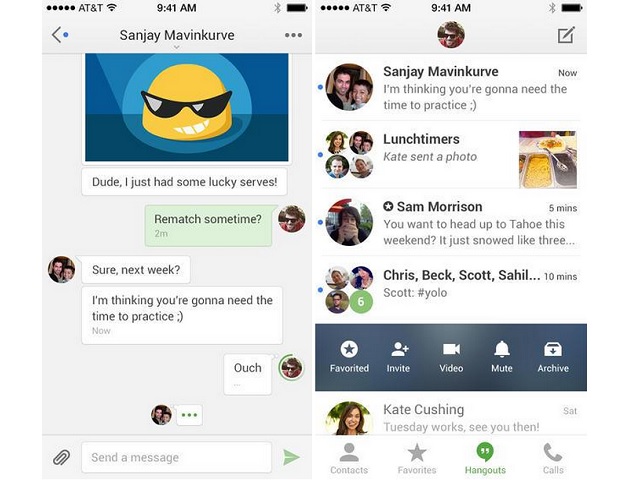 Google has revamped its Hangouts for iOS app by adding stickers, video messaging and a few other features â marking a first major update after it added phone calls last year in October.

âThe app has a brand new look and feel, is super easy to navigate, and includes a bunch of performance improvementsâ, announced Frank Petterson in a Google+ post.

Some of the new features included in the redesigned Hangouts for iOS are animated stickers that would allow users to express their mood; short video messaging; and location sharing.

The version 2.0 of Hangouts for iOS has been optimised for iPad meaning that users will be able to âenjoy big, beautiful video calls, and a two-pane conversation viewâ. iPad users will find that the app supports picture-in-picture messaging just like Skype.

Video messaging feature can be found at the bottom left of open chats within the camera option under the paper clip icon.

Users can share quick snaps in a one-on-one chat or within a group by tapping the shutter button. Users can also share short 10-second video messages by holding down the same button.

In terms of the design, the version 2.0 puts the four tabs at the bottom of the screen: Contacts, Favourites, Hangouts, and Calls. Further, swiping across an existing Hangout brings four options: Favourite, Video, Mute and Archive allowing users to mark it as favourite, or initiate a video chat or even archive it.