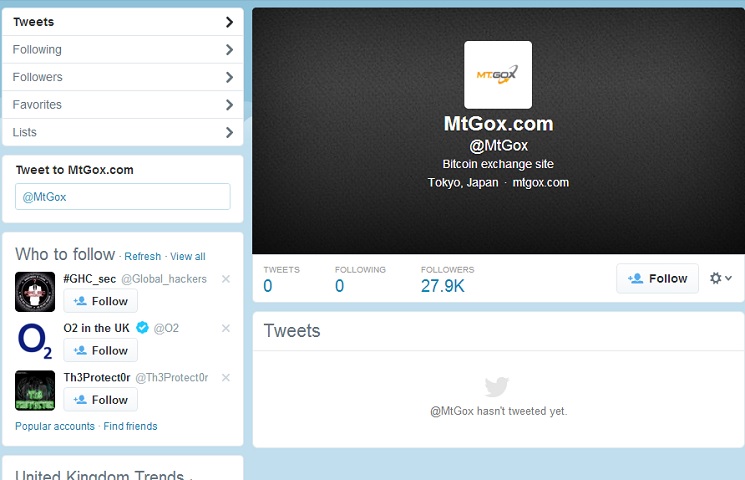 Mt Gox is probably going through the worst time in its history with falling Bitcoin prices, suspended withdrawal, angry customers, and on top of that an emptied twitter feed. Yes you read it right, just head onto Mt Goxâs twitter feed and you will find that the account which once had over 3600 tweets is currently empty without a trace.

There is no information as to why the tweets are missing, but there are speculations of either a hack or signs that Mt Gox is going down under. Users have taken to different social media platforms to raise their concerns over the missing tweets and most of them are negating the possibility of a hack as just deletion of tweets doesnât really justify anything on hackerâs end.

Trouble for the exchange started as early as February 7 when Mt Gox suspended Bitcoin withdrawals citing technical issues. Just a few days after this, the Japanese company blamed ‘transaction malleability’ bug in Bitcoin design as the reason behind the suspension and revealed that they are working on a fix to resolve the issue and reinstate withdrawal feature.

According to Mt Gox, Bitcoin withdrawals were to commence soon as it was successful in applying the fix, but that didnât happen and because of the uncertainty surrounding the whole withdrawal system, Bitcoin prices plummeted to a low of $91.50 on February 21.

Just yesterday Bitcoin prices surged to an intraday high of $348.98 after rumours hit Reddit that Mt Gox was testing withdrawals and that users will be able to withdraw their digital currency soon. Investors have probably realised now that it was just a hoax and as a result the Bitcoin prices have once again corrected to a sub-$160 levels (as of press time).