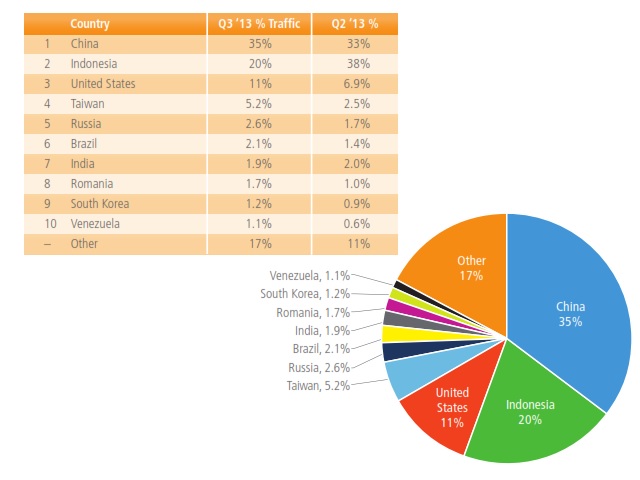 China has surpassed Indonesia to become the largest source of attack traffic for the third quarter of 2013 according to latest State of the Internet report from Akamai.

âThe overall concentration of attacks declined as compared to the second quarter, with the top 10 countries originating 83% of observed attacks, down from 89% in the prior quarterâ, states Akamai.

Akamai notes that the bulk of the traffic, just over 68 percent, still emanates from Asia Pacific region. Europe, North and South America all saw an increase in the observed attack traffic to 13.5 percent and 16 percent respectively.

The report notes that even though there has been a decline in the number of DDoS attacks for the third quarter of 2013 as compared to the second quarter, the overall count of the DDoS has reached 807 already overtaking the 2012 count of 768.

âWhile there was a minor reduction (11%) in the number of attacks during the third quarter, 2013 will end up being a much more active year for DDoS than 2012 wasâ, Akamai reports.