For Mental Health Awareness Month, Urbancoolab Is Launching âOkToNotFeelOkâ Campaign Highlighting That You Are Not Alone 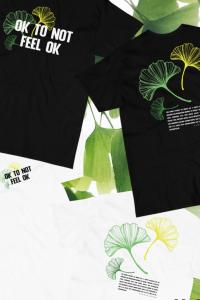 SAN FRANCISCO, CALIFORNIA, USA, May 3, 2021 /EINPresswire.com/ — urbancoolab is looking to raise awareness around mental health by leveraging its ties to the arts, fashion, music, and fitness communities to better amplify the important message of self-healing. Through the power of the companyâs partner members, urbancoolab hopes to highlight the intricate nuances of mental health issues and let people know that they are not alone. Professionals in the field estimate that 2 in 5 individuals (US-based) reported having some form of mental health issue in just the past year alone. Through the amplification of its âOK to Not Feel OKâ campaign, urbancoolab is aiming to normalize such discussions, while shining a light on what signs to look for in someone who may be struggling with demons of their own.

Key Stats to take note of:

The Ripple Effect of mental illness:

People with depression have a 40% higher risk of developing cardiovascular and metabolic diseases than the general population
18.4% of U.S. adults with mental illness also experienced a substance use disorder in 2019 (9.5 million individuals)
High school students with significant symptoms of depression are more than twice as likely to drop out compared to their peers

urbancoolab enlisted the creative expertise of acclaimed singer/songwriter Shamir to help fortify the campaignâs core message. The multifaceted artist is an advocate for mental health and has spoken out publicly about his experiences with bipolar disorder. On the other side of the professional spectrum, is Over The Bridgeâa non-profit organization whose main goal is to help music industry professionals overcome mental health issues and/or meet addiction recovery goals. Having collaborated with both parties on separate projects, urbancoolab succeeded in bringing both sides together for an informative discussion about the pitfalls of mental health disorders.

Lastly, urbancoolab will tie in the campaignâs core messaging with a thematic capsule collection. In terms of artistic inspiration, the company looked to the world of flora for answers, landing upon one of the most resilient plants on earth. With approximately 170 million years of history on its side, the ginkgo biloba plant contains vast regenerative qualities that have benefited both the medical and culinary worlds. Ginkgo biloba imagery will feature heavily throughout urbancoolabâs âOkToNotFeelOkâ capsule collection, as a reminder of resiliency. urbancoolab will follow in the footsteps of its partner members and will donate a portion of sales to a reputable organization who can help amplify the cause and message. 50% of all proceeds will go to the Canadian Mental Health Association (CMHA).