Black Death maps of medieval Britain: Guide to the level of devastation 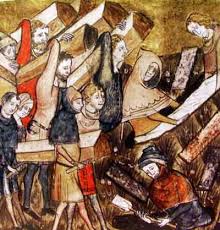 Archaeologists and historians alike have debated much over the actual level of death and destruction caused due to the deadly disease – âBlack Deathâ that engulfed 14th century rural England. Professor Carenza Lewis of University of Lincoln has been conducting in-depth study and research in this direction. She is of the view that loads of speculations have already been made in view of estimating the actual number of deaths that occurred, but there hasnât been any unanimous or consistent data so far with regards to the total population during that era.

In order to gauge the true degree of devastation and âeye-wateringâ effect caused by Black Death, intensive research and analysis of pottery shards had been carried on by Lewis. It is estimated that the disease that plagued medieval rural England also claimed the lives of 75 to 200 million people across the rural sector and towns in Asia and Europe.

Lewisâs research has brought about several maps providing factual data of the level of devastation caused across England as population declined. Pottery finds have been taken to be a stable evidence of human existence putting an end to speculations and miscalculations. Pottery shards were collected during the period from 2005 until 2014 as a result of 2000 or higher pits excavation. The decline in pottery shards had a direct correlation with the disease spread. Pottery had been popularly used in medieval eastern England and pottery shards discovered in a particular test pit were good indicators of the amount of population existing in that region, according to Lewis.

The maps revealed that the most adversely affected areas â where population declined by over 70 percent included Hertfordshire, Cambridgeshire and Norwich. Those medieval settlements which had been long abandoned were not taken in the study â only 55 settlements had been included in the research. Pottery shards diminishing rate was 45 percent in the period from the early part of 12th century to the latter part of 16th century.

According to Lewis, this statistic proved the fact that Englandâs population showed a decline to the range of 35 to 55 percent after the Black Death epidemic and this continued further into the 16th century. Not only this, the research brought about abundant evidences of demographic changes and settlements that may be still existing under the current villages, towns and communities. In other words, any excavation in any region of UK, Europe or even further could reveal the extent of devastation experienced post the epidemic.

Lewis also states that Black Death may not be a bygone phenomenon. Studies have shown that the plague is rampant in certain parts of the world even today, and also the resultant social disturbances, very similar to what Europe faced earlier.The fact is Black Death being widespread in certain regions of the world currently could eventually pose a bigger risk, in case resistance develops against certain antibiotics used for treating similar conditions. Its reason enough to be alarmed.