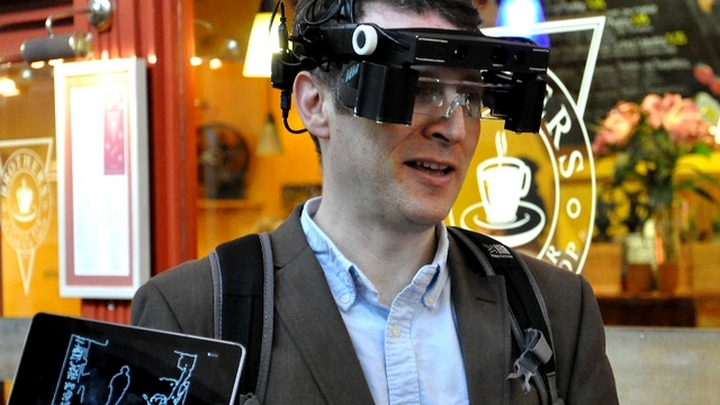 The OrCam device is a specialized computer that can read texts out loud to the user. It includes a miniature camera that clips-on magnetically to the userâs glasses. The camera is connected to a miniature battery-powered computer through a small wire. The portable device can be carried in pockets of clipped on to belts. A pair of bone conducting headphones discreetly carries the speech to the usersâ ears.

The UC Davis study involved elderly patients with an average age of 62 years, all afflicted by a variety of disorders like late-stage glaucoma and age related macular degeneration, a serious and incurable condition that affects hundreds of millions of people all over the world. Baseline studies conducted on the 12 patients using just their glasses established that none of them could undertake 5 out of 10 everyday tasks like reading text on a smartphone/tablet, newspaper articles, pages from a book, or menu cards.

After 1 week of using the OrCam device, all participants were able to perform 9 out of the ten tasks from the baseline test, showing clear progress and improvement in their visual functioning. The device was reported to be easy to use, with simple tap or point functionality. But one caveat is that the device cannot be operated patients with complete vision loss, since some level of visual guidance is required to operate the camera.

The software in the device is based on an algorithm called Shareboost, developed by Amnon Shashua, the founder of OrCam and a professor of computer science at Hebrew University. Capable of speedy text recognition, the software can also be programmed to store and recognize faces as well commercial products.

According to Mark J Mannis, Director of the UC Davis Eye Center and co-author of the study, âWe havenât seen anything else comparable to OrCamâs product.â

âIt is easily used and could potentially bring greater independence, particularly for older patients who are struggling with vision loss.â

The Israeli startup also has other ambitious wearable devices under development, including what they claim will be the first wearable AI that can work as a PA and monitor and assist in the userâs daily functioning and interactions.