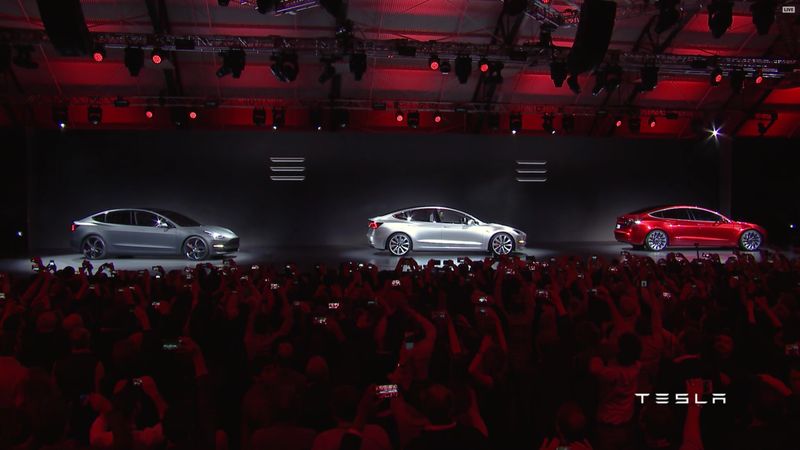 It has been years in the making, but it has finally arrived, the long heralded Tesla Model 3. Telsa CEO and founder Elon Musk took to the stage last night to unveil the Model 3, the next in Tesla’s series of electric cars. A crowd of Tesla fanatics who cheered his every word, but when Musk was able to get a word in about the Model 3, we heard much the same as we have heard before.

The Tesla Model 3 will deliver at least 215 miles of range, can go from 0-60mph (96 kph) in 6 seconds, seats 5 comfortably, and will begin at $35,000 (around Â£30,000). As with the Model S, there will be both rear wheel and all wheel drive versions available. There are also front and rear trunks.Â “More cargo capacity than any gasoline car of the same external dimensions,” says Musk.

Tesla has already received 150,000 preorders for the vehicle, which once paid for in full would amount to over $5 billion in sales (Â£3.5bn).

Tesla expects to start delivering on those preorders by the end of 2017. In the meantime, in addition to building the cars themselves, Tesla will be expanding its Supercharging network to support all these new vehicles. “It’s about going where you want to go”, according to Musk. By the time the Model 3 launches, Tesla plans to have to double the number of Superchargers available today to 7,200.

While the future does look promising for Tesla, the company has a great deal of work ahead of it to meet its lofty goals, much less satisfy all of the preorders that have been placed. Tesla has set its sales target for the Model 3 at 500,000 vehicles per year. In order to sell the low-priced Model 3 at a profit, Tesla has to reduce the cost of its batteries.

To meet that challenge, the Tesla factory in Fremont, California will require massive expansion. It will also require the completion of its ambitious Gigafactory battery plant that is under construction in Nevada. Even if Tesla is able to meet its goals, it will still be facing competition from more established car makers, most notably GM’s similarly priced electric car the Chevy Volt.

If you want to watch Elon Musk reveal the Model 3 in all of his semi-charismatic glory, you can find it here.