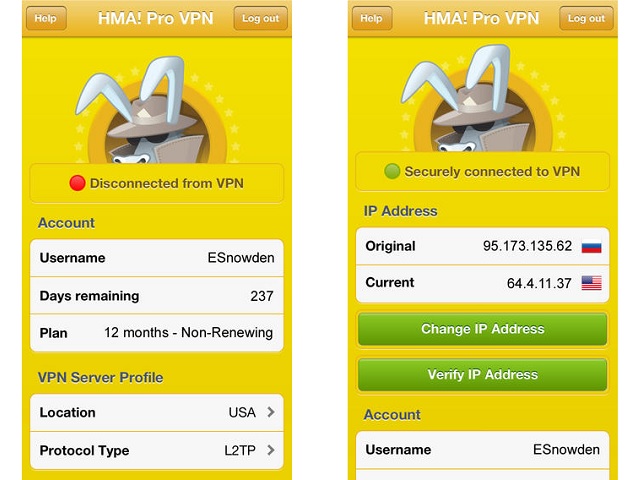 Using Edward Snowdenâs name for promoting an anonymous VPN service may attract quite a few users considering how the recent NSA related revelations have rocked the online world. And this is exactly what HideMyAss Pro VPN is doing to market its iOS app on Apple App Store.

The App Store listing of HMA! VPN Pro has a screenshot that shows a user âESnowdenâ using the service from a Russian IP address and trying to connect to a US-based IP address. This type of marketing is definitely to attract as many users as possible, but those who are aware about the history of HMA wonât be lured so easily.

Two years back HideMyAss was ordered to reveal information of one of the PlayStation Network hackers and members of LulzSec who used its services, which the VPN provider readily provided.

Using Snowdenâs name for PR purposes is rather ironic for the fact that HMA! doesnât provide a great deal of anonymity and according to TorrentFreak, HMAâs logging policy states that the VPN provider will log information such as timestamp of connection and disconnections; IP address used by you to connect to its VPN; amount of data transmitted during a userâs session; and IP address of the individual VPN server used by the user.

We have reached out to HMA and will update the story as soon as we hear from them.