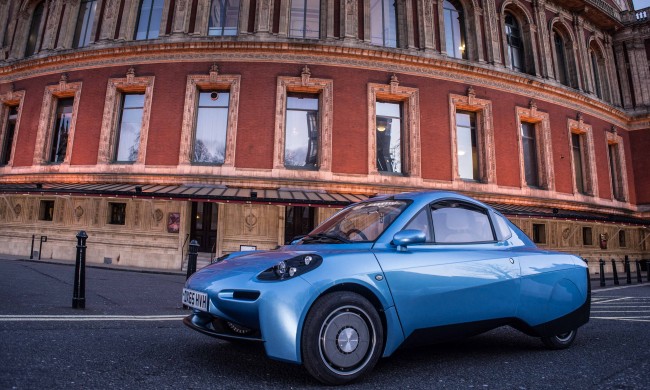 “To pursue, systematically, the elimination of the environmental impact of personal transport.”

This is the purpose of behind Riversimple, a car manufacturer that has been developing a hydrogen car with the support of a Â£2 million grant from the Welsh government. The result of their efforts? The Riversimple Rasa. A hydrogen car with a claimed fuel economy of 0.9L/100 km (250 mpg). The Rasa can reach up to 96 km/h (60 mph) and has a range of 483 km (300 miles) on a 1.5 kg tank of hydrogen.

How does it work? Hydrogen cars like the Rasa are powered by compressed hydrogen in high pressure tanks. In the Rasa’s case, this tank is stored in the trunk. As the hydrogenÂ gas is passed through a fuel cell, and the hydrogen is mixed with the oxygen in the atmosphere to generate an electric current. This electric current is then used to power the motors stored in each of the Rasa’s wheels. The only emission is residual water vapor that is clean enough to drink (theoretically).

Another innovative aspect of the Rasa is the supercapacitors stored in the front of the vehicle. These capacitors are similar to a battery in that they store a charge, but rather than hold a small charge for a long period of time, the capacitors briefly hold a very high charge. It receives this charge when the car brakes. 50% of the energy normally lost to heat when the car brakes is redirected and stored in the supercapacitors. This energy is then sent back to the motors to power the vehicle’s acceleration.

Riversimple has recently received an additionalÂ Â£2 million grant from the European Union to begin testing their cars. Riversimple plans to trial 20 of the cars on the road this year. Currently they expect to release consumer available Rasas by 2018. The cost of a Rasa?Â Â£500 a month which pays for use of the car, hydrogen refills, maintenance, and any repairs the vehicle might require.