The First UK Tesla Powerwall Has Been Installed 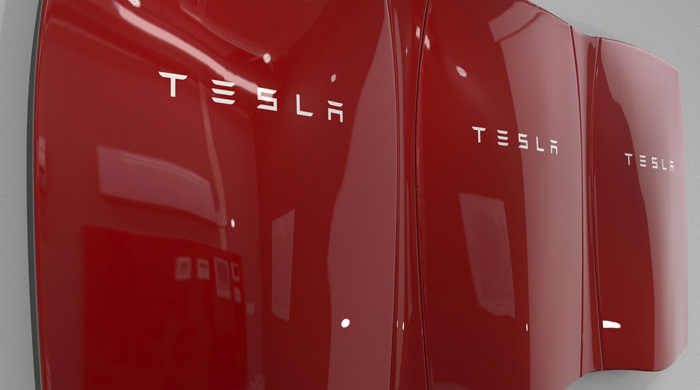 Just a short while ago Mark Kerr and his family became the first in the UK to have a Tesla Powerwall installed in their home. The Powerwall, with it’s smooth minimalist aesthetic, was debuted by Tesla last year as the first step in overturning the current dependency on electrical utilities for our power.

The Powerwall is at its simplest, a battery. It was designed to be installed in a home already utilizing solar panels to assist in maximising the efficiency of a solar electrical system. The largest problem with solar power is that the peak solar hours do not align with peak use hours. When the sun is bright overhead and the solar panels on the Kerr home are drinking in the light, the Kerrs themselves are out at either work or school. By the time peak use hours of 4pm to 8pm arrive, the sun is setting. The solution is obvious, a way to store the energy during the day for the use, but technology has been slow in producing an affordable method of doing this. The Tesla Powerwall seeks to be that solution.

âThis is the future, definitely,â says Kerr.Â âFor me this is the logical next step. We have the solar panels but we need a way to make best use of the power they produce.â

While there are other solar batteries on the market, the Tesla Powerwall has managed to gather quite the following since its debut last year. It is already being tested by homeowners in Australia and Germany, and with this installation in Welsh Kerr home, the UK joins the list of countries at the forefront of emerging energy technologies. While designed primarily to work alongside solar panels, the Powerwall is still useful for storing energy at night and even in homes without solar power. During non-peak hours when the the rates on your electrical consumption are cheaper, the Powerwall will begin storing the energy for when you need it later when it would be more costly. It also serves as a backup power source in case of a blackout. While not as effective as generator, a battery is quieter, quicker to start, and not fuel dependant.

The Powerwall isn’t open for sale yet, but Tesla has announced a $3,000 price tag. This will be in addition to the approx. $2,000 inverter that will need to be installed to convert the the direct current (DC) produced by the solar panels, the grid, and the Powerwall into alternating current (AC) to be used by your electrical panel. It must also be installed by a trained electrician which will add another $2,000 to the bill. While Tesla has shown the math of how the Tesla will pay for itself over the course of ten years in the money it saves you, recouping only $3,000 on your approx. $7,000 investment doesn’t much make economic sense.

For many consumers eager to use the technology though, saving money isn’t the draw of using solar batteries such as the Powerwall.

“But itâs not just about the money. Weâre environmentally minded and this seems the right thing to do,” says Kerr.

Whether or not the Powerwall is the answer to our energy problems, it represents a huge step forward in this developing field. Many companies across the globe are working on similar products, and having a competitor already installing fixtures in homes will surely spur them to work harder in their endeavors. Until the time these energy saving technologies become widely available however, we are still at the mercy of the grid and the utilities. So maybe double check you turned the light off when you leave the house.