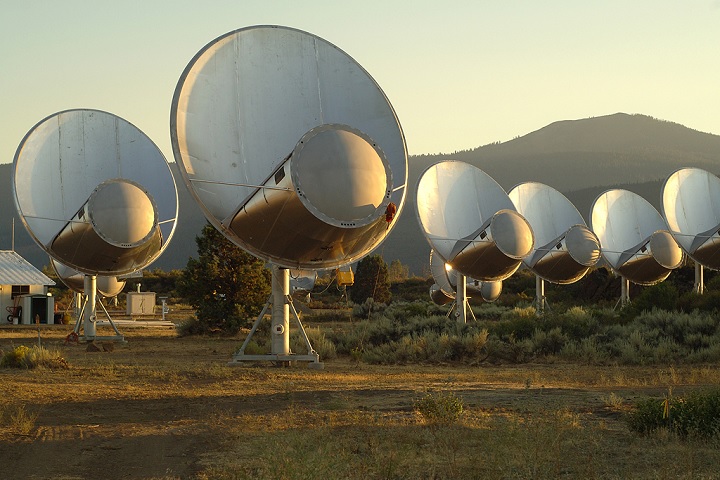 The SETI institute has suggested that it is highly unlikely that the aperiodic dimming of 20 percent and more of KIC 8462852 aka Tabbyâs Star is due to alien megastructures.

The institute put forward its findings in a new paper after more than two weeks of observation using its Allen Telescope Array to find any evidence of a signal that would indicate presence of intelligence. The Array consists of 42 antennas, each 6 meters in size, and is located approximately 500 km north of San Francisco in the Cascade Mountains.

SETI was looking specifically for two different types of radio signals: the first is narrow-band signals, of order 1 Hz in width – something that alien civilisation may be using to advertise its presence; and the second one is broad-band signals that might be due to beamed propulsion within this star system. SETI says that if the civilisation was highly advanced and was carrying out astroengineering projects in the vicinity of KIC 8462852, there is a reasonable expectation that the presence of spacecraft to service this activity would have inadvertently leaked broad-band radio leakage.

âThis is the first time weâve used the Allen Telescope Array to look for relatively wide-band signals, a type of emission that is generally not considered in SETI searches,â said SETI Institute scientist Gerry Harp.

Analysis of the Array data show no clear evidence for either type of signal between the frequencies of 1 and 10 GHz. This rules out omnidirectional transmitters of more than approximately 100 times todayâs total terrestrial energy usage in the case of the narrow-band signals, and ten million times that usage for broad band emissions.

While these limits are relatively high â a fact due primarily to the large distance (>1400 light-years) of KIC 8462852 â one should note the following: (1) The required transmitter power for the narrow-band signals could be reduced enormously if the signal is being deliberately beamed in our direction. (2) Microwave propulsion schemes would undoubtedly be beamed as well, and that would also reduce the minimum transmitter power necessary for detection by the Array.

âThe history of astronomy tells us that every time we thought we had found a phenomenon due to the activities of extraterrestrials, we were wrong,â notes Institute astronomer Seth Shostak. âBut although itâs quite likely that this starâs strange behavior is due to nature, not aliens, itâs only prudent to check such things out.â

Observations will continue, but so far no evidence of deliberately produced radio signals has been found in the direction of KIC 8462852, SETI notes.