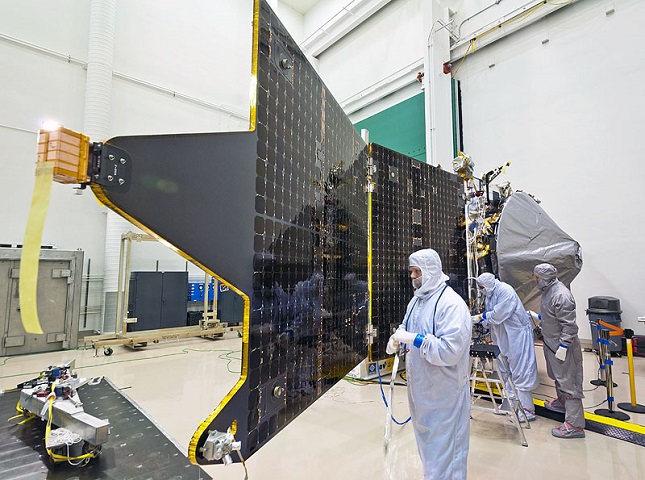 NASA has announced an event to be held in the James Webb Auditorium at its Headquarters in Washington and the briefing is going to be about the planet’s atmosphere and not about life on the barren planet as many news outlets have claimed.

“NASA to Announce New Findings on Fate of Marsâ Atmosphere”, is the subject of the press briefing and if we look at the news conference participant list, it includes Bruce Jakosky, Mars Atmosphere and Volatile Evolution (MAVEN) principal investigator at the Laboratory for Atmospheric and Space Physics (LASP) at the University of Colorado, Boulder, and Jasper Halekas, MAVEN Solar Wind Ion Analyzer instrument lead at the University of Iowa, Iowa City, among others.

Jakosky has been studying the atmosphere of Mars and the effects of the effect of the high-energy particles blowing off the sun on it. In December 2014, Jakosky revealed the initial findings from NASAâs Mars Atmosphere and Volatile Evolution (MAVEN) mission and had said at the time that they are beginning to see links in a chain that begins with solar-driven processes acting on gas in the upper atmosphere and leads to atmospheric loss.

Scientists have long thought that measurements of the solar wind could be made only before these particles hit the invisible boundary of the ionosphere. But MAVENâs Solar Wind Ion Analyzer has discovered something surprising: A stream of solar-wind particles that are not deflected, but instead penetrate deep into Marsâ upper atmosphere and ionosphere.

Interactions in the upper atmosphere appear to transform this stream of ions into a neutral form that can penetrate to surprisingly low altitudes. Deep in the ionosphere, the stream emerges, almost Houdini-like, in ion form again, according to the MAVEN science team.

The reappearance of these ions, which retain characteristics of the pristine solar wind, provides a new way to track the properties of the solar wind and may make it easier to link drivers of atmospheric loss directly to activity in the upper atmosphere and ionosphere.

MAVEN has been studying the planet’s atmosphere for two years now and we believe that the team involved with analysis of MAVEN findings have arrived at concrete conclusion as to what may have happened to atmosphere of Mars and that’s what the news conference is about.