Has a ‘drone’ crashed on Mars? 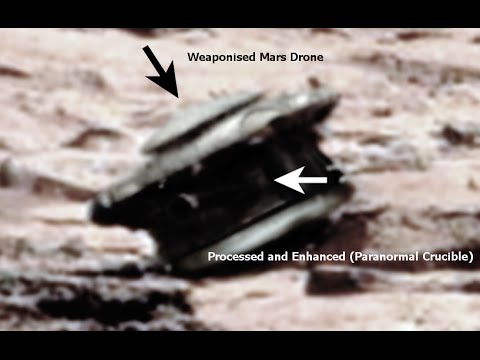 A new video uploaded by an alien and UFO enthusiast claims that a ‘crashed’ drone has been spotted on Mars through one of the images captured by Curiosity rover.

According to YouTuber Paranormal Crucible, one of the images captured by the rover [raw image] while examining rock nest at Gale Crater, shows a ‘drone’-like object that has signs of heavy rusting. According to the video [embedded above] the object or ‘anomaly’ is an evidence of intelligent design and it could have been made by indigenous Martian populace or was possibly deployed by an off world alien species who exploring the Red Planet just like we are doing today.

As with all their analysis, the latest also relies heavily on colour enhancements and highlighting. The video creator says that they have to use these techniques to show very minute details that are obscured in the original original because it isn’t of great quality.

The YouTuber claims that the enhanced image reveals that the object has a ‘rusty dome top’ that appears to have a ‘heavy metal base’ that is also rusted. That’s not it as the video also shows that the mid section of this alleged ‘drone’ has a pipe which is also visible, which could be a barrel of a weapon or possibly the remains of a mechanical device.

“This object was found a few years back, but i will be re-visiting some old discoveries and shedding new light on what they could actually be. Drone footage is from the movie Oblivion”, the video creator notes.

Scott Waring of UFOSightingsDaily throws in his two cents worth claiming that the video creator “is correct”. Waring states: “I really like his cleaned up photo of the object and his new perspective. It gives us a chance to look at it as it was when it was made, and how it might have been used.”