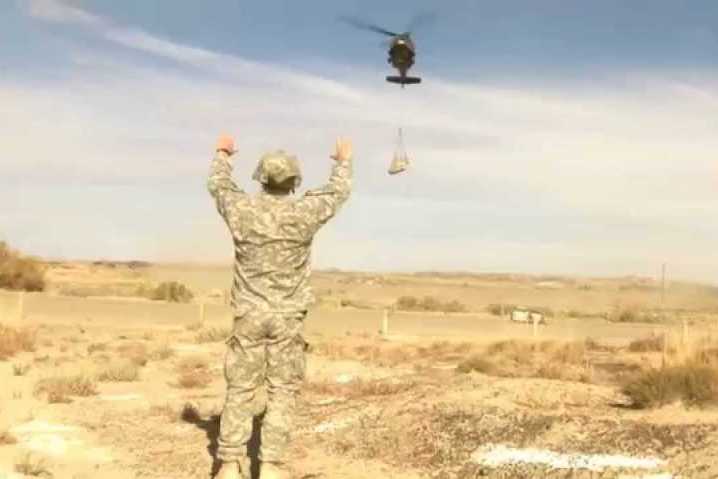 A Pentaceratops dinosaur got a taste of what it’s like to fly in the air, well its remains actually.

New Mexico Museum of Natural History and Science paleontologists arranged for an airlift of the remains of the dinosaur through a US National Guard Black Hawk helicopter from the Bisti/De-Na-Zin Wilderness area south of Farmington, New Mexico.

Found in 2011, the remains are of a Pentaceratops, a plant-eating dinosaurs that lived some 75 million years ago during the Cretaceous period. Paleontologists discovered the remains of the dinosaur when they were trekking through the badlands of the Bisti Wilderness. The same team also found dinosaur fossils at two other sites in the vicinity including the skull of an adult Pentaceratops some 10 miles away from the site where they had found the remains of the baby dino.

Scientists had to figure out a way to excavate the fossils, have them preserved in such a way that they can be transported back to the museum and arrange for a viable transport. While traditional means were out of the question because of the location from where they were found, the team had to think of something else.

This when the idea of getting the remains airlifted was suggested. So, the museum along with concerned authorities got to work and after four years of hard work involving excavation, plaster wrapping and some paper pushing, the team managed to gain permission for airlifting of the remains through a National Guard Black Hawk helicopter.

The helicopter airlifted it to a waiting cargo truck on Thursday morning. The team wasn’t wasn’t able to airlift all the plaster jacket because of muddy conditions in the area, but they will be doing it soon.

Museum curator Spencer Lucas said that once the plaster encasing arrive at the museum, they will be cleaning them up and arrange the bones. After that they will be carrying out an extensive research including examination of the tooth marks.