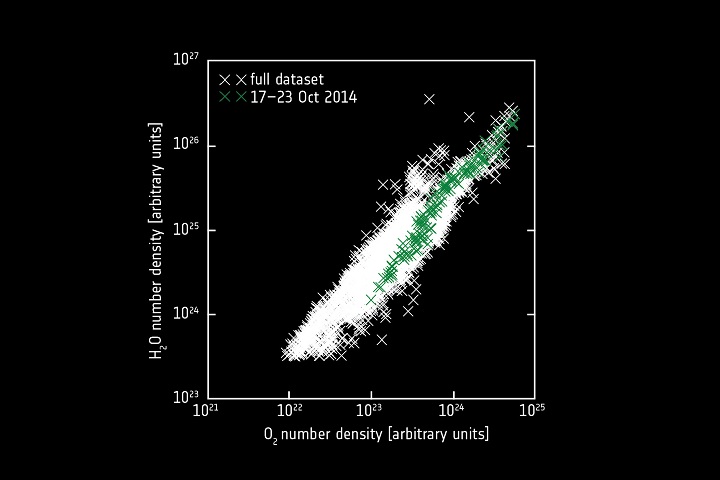 Scientists have discovered molecular oxygen in comet Churyumov-Gerasimenko’s atmosphere after analysing data captured by ESA’s Rosetta spacecraft, which has been orbiting the comet for over a year now.

While water vapour, carbon monoxide and carbon dioxide are commonly found gases in atmosphere of comets, molecular oxygen is not and the latest discovery is the first of its kind because of which scientists involved with the study are surprised.

Researcher explain that while Oxygen is one of the most abundant elements in the Universe – third if we rank it – the simplest molecular version of the gas, O2, hasn’t been tracked till date. The reason being that the gas is highly reactive and readily breaks apart to bind with other atoms and molecules. Oxygen atoms and molecules can combine with hydrogen atoms on cold dust grains to form water, or a free oxygen split from O2 by ultraviolet radiation can recombine with an O2 molecule to form ozone (O3).

When University of Bern scientists analysed the data from the ROSINA mass spectrometer, they discovered that between the expected peak values of sulfur and methanol, clear traces of oxygen (O2) molecules were detected. It turns out that O2 is in fact the fourth most common gas in the cometâs atmosphere, after water (H2O), carbon monoxide (CO) and carbon dioxide (CO2).

âWe had never thought that oxygen could âsurviveâ for billions of years without combining with other substances,â says Prof. Kathrin Altwegg, project leader of the ROSINA mass spectrometer and co-author of the study.

Molecular oxygen is very difficult to detect with spectroscopic measurements from telescopes, which explains why this molecule had not already been observed on other comets. An in situ measurement by the ROSINA mass spectrometer was needed to make this discovery.

âIt was also astonishing that the ratio of water to oxygen didnât change in different locations on the comet or over time â so there is a stable correlation between water and oxygen,â says co-author Altwegg. Top middle: high-resolution measurements allowed molecular oxygen (O2) to be distinguished from other species like sulphur (S) and methanol (CH3OH). The detection of the coma gases is stronger closer to the comet nucleus, as expected. The contribution to the detection from contamination from the spacecraft thruster firings during manoeuvres is very low.
Top right: the strong correlation of molecular oxygen abundance with water vapour indicates a shared origin and release mechanism from the nucleus.
Bottom middle: the O2/H2O ratio does not vary significantly over the study period. Short-lived strong variations are attributed to the decrease of the O2 ratio for occasionally higher H2O abundances linked to the daily water-ice cycle. The overall consistent level implies that O2 is not produced today by solar wind or UV interaction with surface ices, otherwise it would rapidly decrease due to the comet’s increased activity. Instead the O2 must have been incorporated into the comet’s ices during its formation in the early Solar System, and is being released with the water vapour today.

In contrast to comets, it is known that oxygen molecules occur on the moons of Jupiter and Saturn. That is explained by their being struck by high-energy particles from their respective mother planets, which does not exist in the case of Comet 67P/Churyumov-Gerasimenko.

The comet has been bombarded for 4.6 billion years, though, by high-energy cosmic radiation particles. These particles can split water, resulting in the formation of oxygen, hydrogen and ozone, among other substances. These particles only penetrate a few metres into the surface, however.

In each of its revolutions around the sun, though, the comet loses between one and ten metres from its circumference. Since its last meeting with Jupiter in 1959, which set the comet on its current orbit, it has consequently lost more than 100 metres of its material.

The most likely explanation, according to the researchers, is that the oxygen originated very early, before the formation of the solar system. Specifically, high-energy particles struck grains of ice in the cold and dense birthplaces of stars, the so-called dark nebulae, and split water into oxygen and hydrogen.

The oxygen was then not further âprocessedâ in the early solar system. The oxygen measurements show that at least a significant part of the cometâs material is older than our solar system and has a composition typical of dark nebulae, from which solar nebulae and later planetary systems originate.

âThis evidence of oxygen as an ancient substance will likely discredit some theoretical models of the formation of the solar system,â says Altwegg.