What’s behind Moon’s horizon glow? UWA scientists have the answer 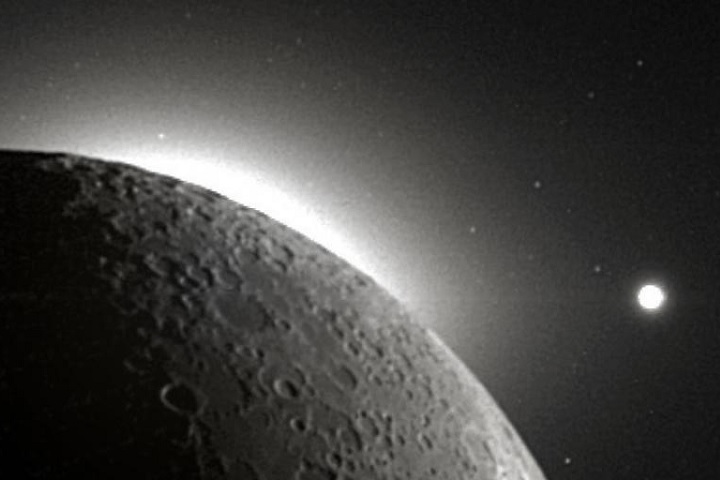 Scientists have finally managed to unravel the mystery surrounding Moon’s horizon glow – a phenomenon that has baffled the scientific community for more than 50 years.

For a long time researchers have believe that the mysterious horizon glow on Moon – a bizarre glow occurring on the Moonâs western horizon just after sunset – is caused by fine dust particles being lifted by electric fields very high above the surface of the Moon. However, that’s not the case say researchers at University of Western Australia. According to them, there are two things that play a role in Moon’s horizon glow.

Researchers of the latest study published in Journal of Planetary and Space Science claim that the reasons for âhorizon glowâ relate to two new phenomena concerning dust movements on the Moonâs surface – âsunrise dust stormsâ and âhorizon brighteningâ.

Researchers say that sunrise dust-storms were caused by Apollo 12 mission rockets freeing up dust particles on the Moon’s smooth surface and then sunrise lifting them to this height. Researchers reveal in the paper that the first sunrise after Apollo 12 astronauts left the Moon caused dust storms across the site where rocket exhausts had disrupted about 2000 kg of smooth fine dust. The next few sunrises started progressively weaker dust storms, and the Eastern horizon brightened, adding to direct sunlight for half an hour.

Brian OâBrien, an adjunct Professor from the UWA School of Physics, said the discoveries were made using a matchbox-sized dust detector he invented in 1966. The Ground truth measurements were made 100 cm above the surface by the 270 g Apollo 12 Dust Detector Experiment.

Professor OâBrien also developed a model explaining sunrise dust storms and the resulting new phenomenon of âhorizon brighteningâ, which occurs when the dawn horizon becomes one to four per cent brighter than sunlight at the end of sunrise.

Researchers caution Google Lunar XPrize competitors and others planning missions to the Moon and large airless asteroids that, after a spacecraft lands, dust hazards may occur after each of the first few sunrises.