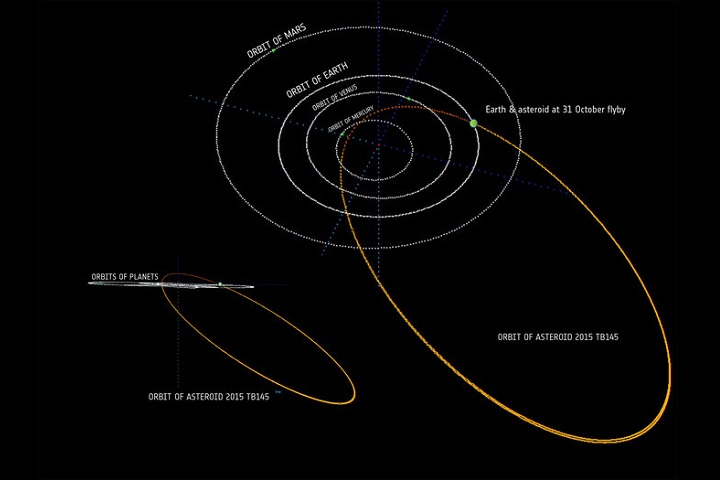 The 400m wide asteroid 2015 TB145 is hurling towards Earth at speed of 35 km/s and while the asteroid took astronomers by surprise, it has now been confirmed that it will miss our planet by 480,000 km.

The flyby has been confirmed by the European Space Agency (ESA) as a miss with the asteroid, which is four times the size of a football pitch, zooming past Earth on October 31 at around 17:00 GMT. The asteroid, which was first discovered on October 10, got doomsday and ‘blood moon’ conspiracy theorists to go into a hyperdrive, but ESA has said that 2015 TB145 will visit us on Halloween, but from very far away.

The speed of the asteroid is higher than the typical encounter speed of near-Earth asteroids and according to astronomers who are tracking the asteroid, it will not hit out planet – not now nor in next 100 years at least.

âThe fact that such a large near-Earth object (NEO), capable of doing significant damage if it were to strike our planet, was discovered only 21 days before closest approach demonstrates the necessity for keeping daily watch of the night sky,â says Detlef Koschny, in ESAâs Space Situational Awareness office.

Scientists are yet to determine the physical characteristics of the asteroid as they keep close tabs on the asteroid using telescopes and radars ever since it was discovered.

âThe diameter of about 400 m has a large uncertainty, as is usual in the case of any object for which we do not yet know details, such as its composition,â says Marco Micheli, an astronomer working at ESAâs NEO Coordination Centre in Italy.

âMore accurate information on the size will likely become available once the object is observed by radar, which is expected to occur between now and early November via NASAâs Goldstone tracking stations and the Green Bank telescope.â

Estimates give around 5000 NEOs of this size, of which a significant fraction has not yet been discovered.

In addition to working with existing European and international astronomical assets and local and national observer teams, ESA is developing a new capability to perform nightly automated surveys.

This is based on Europeâs new, automated âFly-Eyeâ telescope technology, expected to be ready for testing at the end of 2016.

âObjects of this size are often spotted by automated surveys,â says Detlef. âThe only difference is that, being so large, they are often found when they are quite far away, out to 2.5 times the SunâEarth distance, and not just before a close approach, as in this case.â