Alien enthusiast spots ‘animal’ on Mars, but misses out on three other ‘anomalies’ 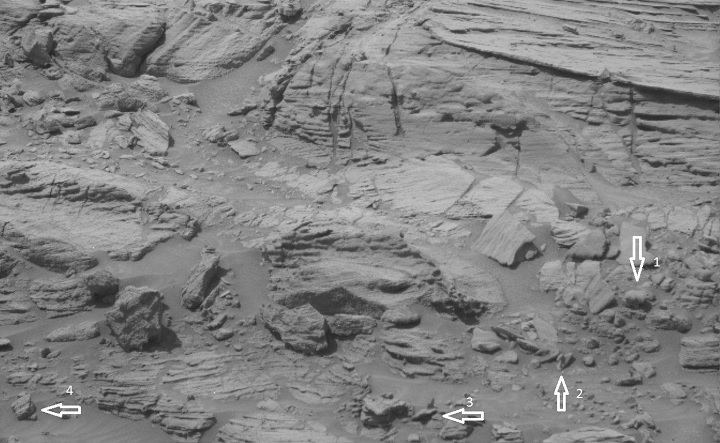 Alleged sightings of ‘anomalies’ on Mars have become a common thing now, but it seems that self-proclaimed alien expert and alien hunter who spotted a real ‘animal’ on Mars recently may have missed spotting a couple of ‘birds’ and a ‘human head’.

A ‘possible hybrid rodent’ was spotted by Paranormal Crucible, a YouTube channel, and claimed that it had 3 visible legs, a plum body and a small head. The person(s) behind this YouTube channel have a desire to find and report such ‘anomalies’ on Mars using images uploaded by Mars. They do so to present us with truth about aliens that the US government and NASA have been allegedly hiding from us.

Same goes for Scott Waring of UFOSightingsDaily who has been hunting for aliens and UFOs and writing about them for years now. The arrow marked ‘1’ is the alleged ‘animal’, which Paranormal Crucible claims is a small rodent hybrid and Waring says is a baby bear [conflicting statements]. The arrow marked ‘2’ is a ‘duck’, which I found using state of the art artistic licenses and high-end image enhancing software [NOT AT ALL]. Then I present to you the ‘swan’ – arrow marked 3 – that is seemingly looking at the ‘duck’. And finally, the most gruesome of all, the arrow marked 4 shows a severed ‘human head’.

Will the UN consider my findings?

Waring said that he has been, for years, sending out his findings to the UN, but with little success. While he continues his efforts of finding more such anomalies and reports them to us as well as the UN, I was also wondering if my findings will be considered by UN and will Ban Ki-moon, UN Secretary-General, act on those!

What do you think? Also, if you find some more animals or birds or statues, do let us know in the comments section!