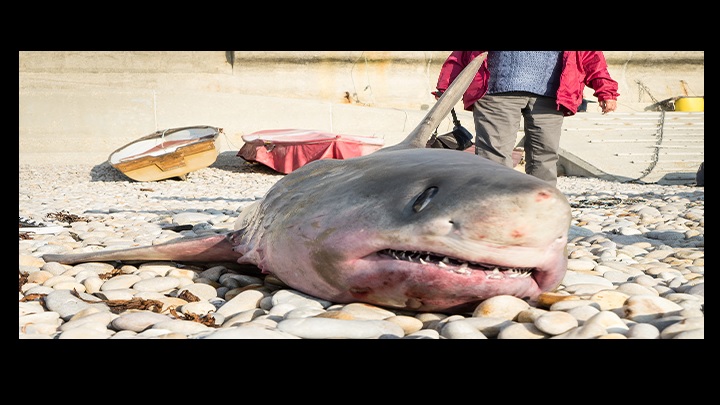 This is a shark encounter of a different kind! A fisherman in Dorset was fishing 250 metres off Chesil Cove and accidentally caught a critically endangered porbeagle shark.

Jan Davey said that while he was fishing off the coast, he saw something caught in a trammel net about 300 yards off the Cove. Even though the shark was too big for his boat, Davey managed to haul it back to shore. He says that he wasn’t aware of the species that that he wasn’t specifically looking to catch one of these. The size of the shark gave passerby the impression that it was a surfboard, until they opened its massive jaws to reveal rows of razor-sharp teeth.

This hauling of the shark to the shores caused Dorset Wildlife Trust (DWT) to call for better protection for Ocean Giants. Marc Smith, DWT Chesil Beach Centre Manager said âThis was an unfortunate incident. The fisherman was clearly not targeting the animal, given the location of the nets. But porbeagles are breeding at this time of year, ready to give birth in the spring, so it is a shame to see this reproductive female removed from the population.â

Porbeagle sharks are mackerel sharks, related to the mako and white shark. They typically grow to around 3m but despite their appearance and size, they are not considered a danger to humans as their main interest is fish.

Like most sharks they are long-lived, slow growing, mature late and produce few young, making them extremely vulnerable to overfishing. Since 2010, commercial fishermen within the EU have been prohibited from targeting and landing porbeagles. When accidently caught, they must be returned to the sea, unharmed if possible.

Marc Smith added âI am not surprised that this shark has been caught just off Chesil Beach. We get regular reports from fishermen about porbeagles around the Dorset coast. Basking sharks, blue sharks and porbeagles have all been seen close by. We also get dolphins just off the beach, following the fish. All of which are susceptible to nets.â

The Wildlife Trusts are currently proposing that 17 special areas around England and Wales should become protected areas for dolphins, whales and sharks to safeguard these species (some of which are in decline) against damaging activities. This includes Lyme Bay in Dorset, which is a hot spot for white-beaked dolphins, bottlenose dolphin, the common dolphin and the basking shark, to name just a few.