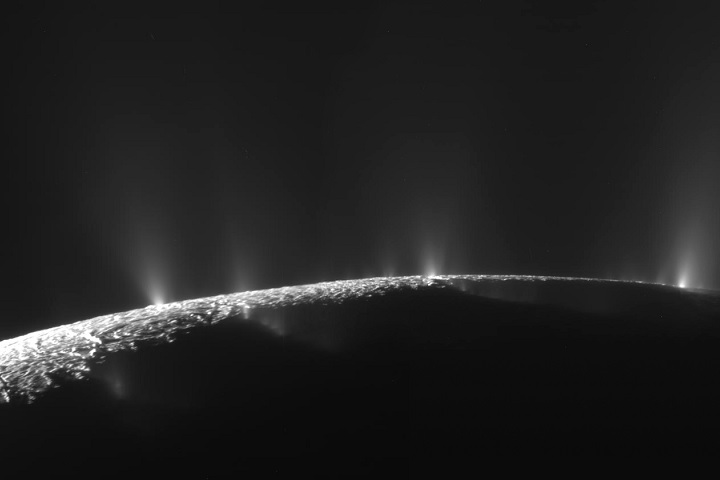 NASA’s Cassini spacecraft is eyeing hydrogen and other heavier molecules as it makes its way through the icy spray plume of Saturn’s moon Enceladus.

The spacecraft is on its way towards Enceladus and on October 28 i.e. tomorrow, it will be flying past Saturn’s moon at an altitude of just 30 miles (49 kilometers) above the moon’s south polar region. While the flyby isn’t the closest for Cassini, it is definitely the deepest one ever for the spacecraft through the plume.

According to Cassini mission scientists, the flyby will enable them to garner insights into the activity in the global ocean below Enceladus’ frozen surface. Through the data gathered during the flyby, scientists are hoping to learn and gather more information about how much of hydrothermal activity is occurring within Enceladus. Further, the team is also looking to understand how this hot-water chemistry might impact the oceanâs potential habitability for simple forms of life.

NASA revealed that using spacecraftâs ion and neutral mass spectrometer instrument (INMS), scientists are hoping to detect molecular hydrogen. According to Hunter Waite, INMS team lead at Southwest Research Institute in San Antonio, the presence of molecular hydrogen in the plume would be an independent confirmation that hydrothermal activity is taking place in the Enceladus ocean, on the seafloor. Further, the amount of hydrogen they detect will enable them to measure and learn how much hydrothermal activity is going on.

Scientists are also looking forward to using Cassini’s cosmic dust analyzer (CDA) instrument to collect data that will enable them to better understand the chemistry of the plume. One of the reasons why NASA decided to go for a flyby at such low altitudes is that scientists intend to detect and access heavier, more massive molecules — including organics — than the spacecraft has observed during previous, higher altitude passes through the plume. The CDA instrument, which is capable of detecting up to 10,000 particles per second from the plume, also is expected to reveal how much material the plume is spraying from the moon’s ocean into the space around Saturn.

“There’s really no room for ambiguity,” said Sascha Kempf, a CDA team co-investigator at the University of Colorado at Boulder. “The data will either match what our models are telling us about the rate at which the plume is producing material, or our concept of how the plume works needs additional thought.”

Further, scientists are also looking to establish the structure of the plume – whether it’s comprised of column-like, individual jets, or sinuous, icy curtain eruptions or a combination of both. Given the important astrobiology implications of these observations, the scientists caution that it will be several months before they are ready to present their detailed findings.

Cassini will acquire images of Enceladus both before and after the encounter. For the time of closest approach, the cameras’ fields of view will drag across the surface. These observations are expected to capture some of the highest-resolution views ever of the icy south polar terrain, lit by reflected light from Saturn. Post-flyby processing will be used to remove blurring caused by the spacecraft’s movement during exposure.

“Cassini truly has been a discovery machine for more than a decade,” said Curt Niebur, Cassini program scientist at NASA Headquarters in Washington. “This incredible plunge through the Enceladus plume is an amazing opportunity for NASA and its international partners on the Cassini mission to ask, ‘Can an icy ocean world host the ingredients for life?'”

The last of Cassini’s three final close flybys of this icy moon, targeted at an altitude of 3,106 miles (4,999 kilometers) on Dec. 19, will examine how much heat is coming from the moon’s interior. The closest-ever Enceladus flyby took place in October 2008 at an altitude of 16 miles (25 kilometers). Cassini flew closer to the moon’s icy surface during that encounter, but passed through the plume at a much higher altitude than it will during the Oct. 28 flyby.