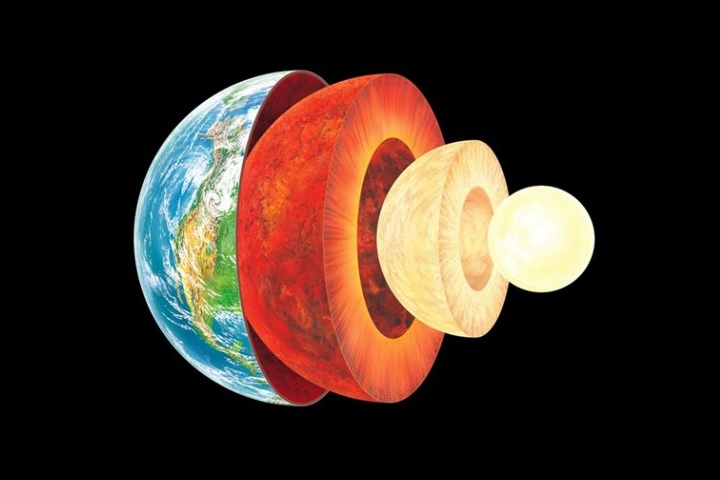 A new study claims that Earth’s inner iron core started forming much earlier than previously believe – as many as half a billion years and it is still growing.

The findings of the study by researchers at University of Liverpool’s School of Environmental Sciences suggest that the core was formed 1 – 1.5 billion years ago and not 0.5 billion years as previously thought. Researchers have based their claims on analysis of magnetic records from ancient igneous rocks.

The magnetic field of the Earth is generated by the movement of electrically conducting molten iron in the outer core. This movement is generated by light elements released at the inner core boundary as it grows. Therefore, the time when iron was first frozen also represents a point in time when the outer core received a strong additional source of power. This, the researchers say, happened between 1 and 1.5 billion years ago and that’s when the inner core ‘froze’ from the molten iron core.

This increase in magnetic field, researchers say, is a likely indication of the first occurrence of solid iron at Earth’s centre and the point in Earth’s history at which the solid inner core first started to “freeze” out from the cooling molten outer core.

Previous studies have estimated that Earth’s solid core formed somewhere between 0.5 to 2 billion years ago, but the new study published in Nature suggests that’s not the case. Liverpool palaeomagnetism expert and the study’s lead author, Dr Andy Biggin, said: “This finding could change our understanding of the Earth’s interior and its history.”

While this topic is highly debated and controversial, Dr Biggin is of the opinion that determining the timing is crucial for determining the properties and history of the Earth’s interior and this has strong implications for how the Earth’s magnetic field is generated.

Findings of the latest study suggests that contrary to prior beliefs, Earth’s core is cooling at a lot slower rate and this has implications for the whole of Earth Sciences. The findings also suggest that an average growth rate of the solid inner core of approximately 1mm per year which affects our understanding of the Earth’s magnetic field.

The Earth’s magnetic field is generated by the motion of the liquid iron alloy in the outer core, approximately 3,000 km beneath the Earth’s crust. These motions occur because the core is losing heat to the overlying solid mantle that extends up to the crust on which we live producing the phenomenon of convection.

Once the inner core started to freeze, this convection received a strong boost in power because light, non-metallic elements remained molten in the outer core and were buoyant relative to the overlying liquid. The process continues today and is thought to be the main source of “fuel” for generating the Earth’s magnetic field.

Dr Biggin added: “The theoretical model which best fits our data indicates that the core is losing heat more slowly than at any point in the last 4.5 billion years and that this flow of energy should keep the Earth’s magnetic field going for another billion years or more.

“This contrasts sharply with Mars which had a strong magnetic field early in its history which then appears to have died after half a billion years.”

Researchers, however, say that the debate about the age of the inner core and the resulting thermal evolution of the Earth is not yet over. More palaeomagnetic data are needed to confirm that the sharp increase in magnetic field strength that we have observed is really the largest in the planet’s history. Furthermore, modelling needs to verify whether some other event could have created the magnetic strengthening at this time.

The study, published in the journal Nature, is a collaboration between scientists at the Universities of Liverpool, Helsinki, Michigan Tech, UC San Diego, and the Chinese Academy of Sciences.